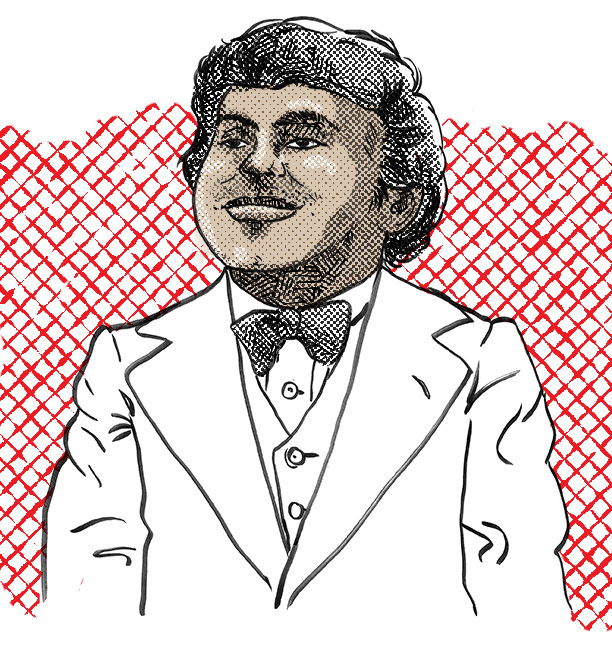 Herve Villechaize was born in 1943 in Paris. A malfunction in his endocrine system would leave Herve at a full-grown height of just under 4 feet tall. Herve eventually studied painting and photography at the famed Beaux-Arts Museum in Paris. At the age of 18 he became the youngest artist to ever have his work displayed in the prestigious Museum of Paris.

At the age of 21 Herve sailed to New York City. After teaching himself English by watching American television and upon immersing himself in the New York City art scene, he would eventually land roles in several off-Broadway plays. In his first notable movie role, Herve played Beppo in the 1971 comedy The Gang That Couldn’t Shoot Straight starring Robert DeNiro. He wouldn’t experience his big break into show biz until 1974 however, when he landed the role of a tiny villain named Nick-Nack in the 1974 James Bond film The Man with the Golden Gun.

Herve moved to California, where he eventually hooked up with Aaron Spelling. Spelling would cast him opposite Ricardo Montalban on Fantasy Island. The show’s six season run made a household name out of his character, Tattoo, and injected his signature call of “de plane, de plane” into American pop culture. Herve’s newfound fame would lead him to command a whopping $25,000 per episode salary. Herve and his wife moved into a 2 1/2 acre ranch in the foothills of the San Fernando Valley. Soon, Herve began to sense he was not being treated as fairly as other Fantasy Island cast members. He responded by demanding the same money as Montalban, prompting ABC to drop Herve from the show.

Leaving Fantasy Island would prove to be beginning of his career decline. Herve, having blown through his Fantasy Island money, eventually had to sell his ranch in the Valley and move into a rental house in North Hollywood. His collapsing career and deteriorating health led Herve to the bottle. He would often consume two bottles of wine in a single night. While not that unusual for average sized people, it was detrimental to Herve as he tipped the scales at just 90 pounds.

Herve’s medical condition was worsening. With increasing pain from internal organs that were too large for his body, Herve was taking upwards of 20 pills a day to alleviate the symptoms. He realized that his body was beginning to shut down, and found himself fending off frequent bouts of depression.

In 1993 Herve’s luck would turn a bit towards the better. He found work in several TV commercials including a Dunkin Donuts spot that, despite his wishes to distance himself from his Tattoo days, found him asking for “de plain” “de plain” donut.

On September 3, 1993, Herve, accompanied by his common-law wife, Katherine Self, attended a movie screening in Hollywood. They later enjoyed dinner at a restaurant near their home.

In the early morning hours of September 4, Herve placed two sound-muffling pillows against his chest, and fired a pistol into them.