The illustrationfriday.com challenge word this week is “hoard”.
hoard (hawrd, hohrd) noun     a supply or accumulation that is hidden or carefully guarded for preservation, future use, etc. 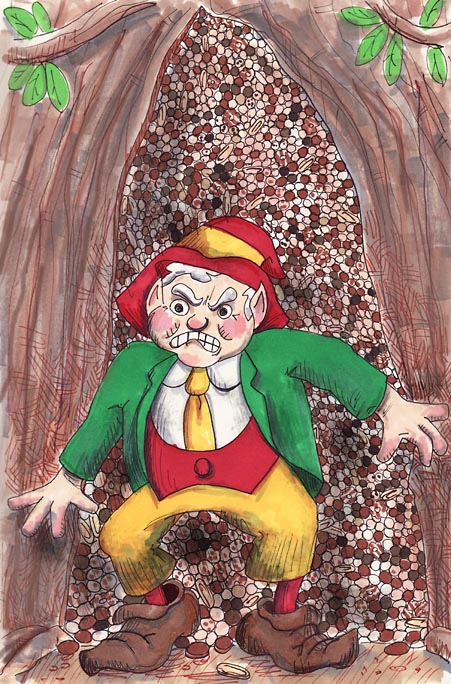 Throughout the nineteenth century, the United States boasted many regional bakeries, such as Chicago’s American Biscuit and Manufacturing Company, the New York Biscuit Company and the United States Baking Company. Also among these companies was the Keebler Baking Company.
Founded in 1853, Keebler has produced numerous baked snacks in the traditional method. Much like its competitors, Keebler used large amounts of manpower operating huge commercial ovens. The Keebler company employed this method for over one hundred years until they came upon the baking secret that they still practice today  magic.
In 1967, Keebler dismantled their entire facility in Elmhurst, Illinois and moved operations to a hollow tree in an undisclosed location. Maintained by just under a dozen elves and one magic oven, the Keebler company began producing cookies that, by industry standards, were “uncommonly good”. They ran a twenty-four hour-a-day shift producing baked treats. Because magic was involved, the finished product was stored in the hollow tree and took up no additional space along side the manufacturing equipment, administrative offices and the elves. The plant (or “tree”, in this case) manager, a firm disciplinarian named Ernie, ran the enterprise with a three-fingered iron fist. He personally upheld the security of the company’s cookie hoard.
The Keebler company was famous for its advertising slogan 
“You never would believe where the Keebler Cookies come from. They’re baked by little elves in a hollow tree. And what do you think makes these cookies so uncommon? They’re baked in magic ovens, and there’s no factory. Try to steal our cookies and  oh man  we will kick your ass!”