The Monday Artday challenge word this week is “anarchy”. 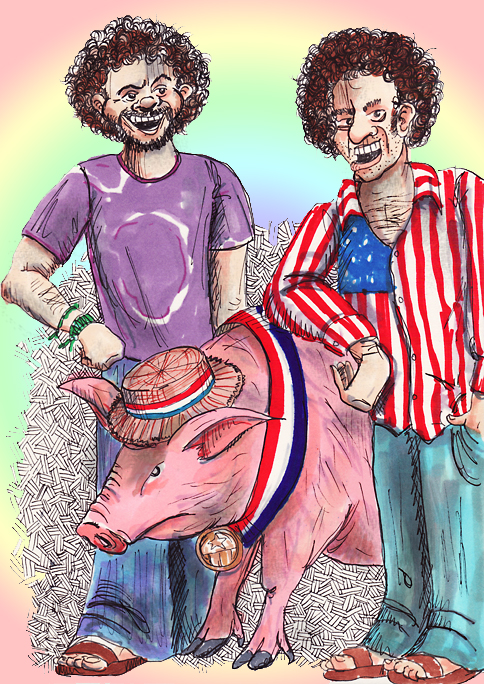 Outside the 1968 Democratic Convention, Jerry Rubin and Abbie Hoffman announced that their candidate for president would be a pig named Pigasus.

Jerry Rubin was a left-wing social activist (read: radical). In 1967, Rubin and some others founded the Youth International Party (The Yippies), an anti-authoritarian political party known for street theatre and politically-themed pranks. Rubin coined the phrase “Never trust anyone over thirty”. He was thirty-two when he said it. Rubin actively protested against the war in Vietnam. As part of the infamous “Chicago Seven“, he played an instrumental role in the disruption of the 1968 Democratic National Convention in Chicago and was put on trial for conspiracy and crossing state lines with the intention of inciting a riot. Although he was found guilty of inciting a riot, his conviction was later overturned on appeal.

After the Vietnam War ended, Rubin became an entrepreneur and businessman. He was an early investor in Apple Computers. On November 14, 1994, Rubin jaywalked on Wilshire Boulevard in Los Angeles, while on his way to dinner with his fiancée. A car swerved to miss Rubin, but a second car was unable to avoid him. He was taken to the UCLA Medical Center, where he died 14 days later.

Abbie Hoffman was also one of the founders of the Yippie party. He also earned a master’s degree in psychology from UC Berkeley. Prior to his involvement with the Chicago Seven, Hoffman led a protest movement in the gallery of the New York Stock Exchange. The protesters threw fistfuls of dollars (most of the bills were fake) down to the traders below, some of whom booed, while others began to scramble frantically to grab the money as fast as they could. Hoffman claimed to be pointing out that, metaphorically, that’s what NYSE traders “were already doing.”

At Woodstock in 1969, Hoffman interrupted The Who’s performance to attempt a protest speech against the jailing of John Sinclair of the White Panther Party. He grabbed a microphone and yelled, “I think this is a pile of shit! While John Sinclair rots in prison. . .” The Who’s guitarist, Pete Townshend, unhappy with the interruption, cut Hoffman off mid-sentence, shouting, “Fuck off! Fuck off my fucking stage!” He then smacked Hoffman with his guitar, sending him tumbling offstage, to the approving roar of the crowd. Townshend later said that, although he agreed with Hoffman’s position, Hoffman had no right to use his stage as a forum.

Hoffman was diagnosed with bipolar disorder in 1980. On April 12, 1989, he committed suicide by swallowing 150 Phenobarbital tablets.