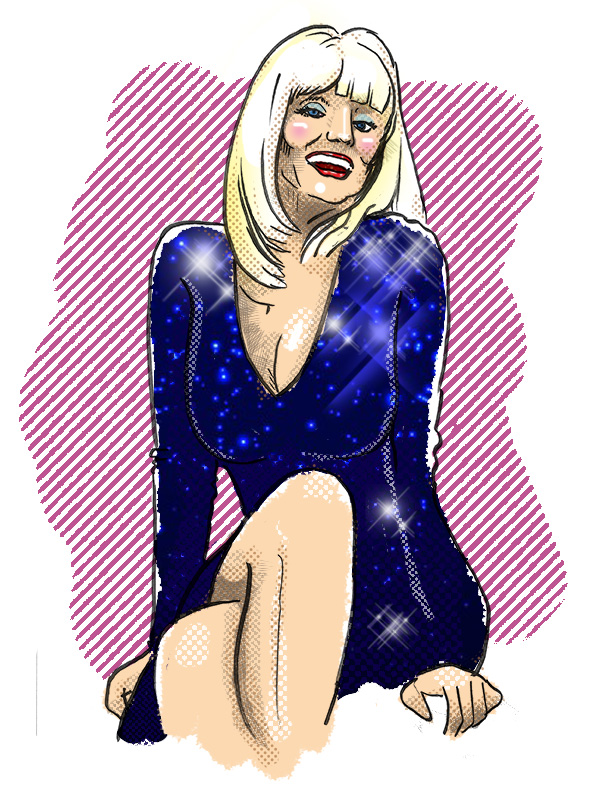 If you are 25 years old or younger, you probably don’t know Carol Wayne. Even if you were around during the height of Carol’s popularity, she is most likely forgotten to you now.

Carol Wayne was a former professional ice skater and Las Vegas showgirl whose “dumb blonde” persona gave her tremendous, but brief, fame beginning in the late 1960s throughout the 1970s. She made single episode appearances in popular shows like Bewitched, I Dream of Jeannie, Emergency!, I Spy and was featured in six different episodes of Love, American Style. She appeared on numerous game shows, including as a regular panelist on Celebrity Sweepstakes, produced by her husband, Burt Sugarman.

But, Carol was best known for her on-going stint as “The Matinee Lady” on “The Tonight Show starring Johnny Carson”. In a series of skits, known as “The Mighty Carson Art Players”, Johnny would portray different characters. One of the most popular was Art Fern, host of the fictional “Tea Time Move.” Art Fern was a parody of local afternoon movie hosts who showed old films and shilled for local businesses. Carol’s shtick involved standing beside Johnny, batting her eyelashes. She was invariably the punchline to a barrage of rapid-fire, double entendre jokes. In 1980, Johnny Carson threatened to quit The Tonight Show unless NBC cut the show’s time from ninety to sixty minutes. NBC had no choice but to reluctantly agree to Carson’s demand. The new sixty-minute format meant that Carson had less time for skits and the need for Carol’s services dwindled.

By the early 1980s, Carol’s demand in show business was practically over. She divorced Burt Sugarman in 1980. In 1984, she declared bankruptcy due in large part to a cocaine and alcohol problem. At times, she was reduced to being an occasional escort for wealthy businessmen in order to make ends meet. In an effort to recharge her diminishing career, she posed for a nude pictorial in Playboy. It netted her a part in the film Heartbreakers. It would become her final movie role.

Carol was on vacation in Manzanillo, Mexico with Los Angeles car salesman Edward Durston on January 10, 1985. The couple had an argument and Carol went for a walk on the beach to clear her head and calm down. Edward, meanwhile, packed and checked out of their hotel. He flew back to Los Angeles, leaving Carol’s luggage at the airport in Mexico. Carol’s body was found in shallow water by a local fisherman. She was fully-clothed, free of drugs or alcohol and had been dead for approximately three days. The official cause of her death was accidental drowning. Carol did not know how to swim and consciously steered clear of water.

Sixteen years earlier, her companion, Edward Durston was in Diane Linkletter’s apartment when she jumped six stories to her death.