The challenge on sugarfrostedgoodness.com this week is “imagine”. 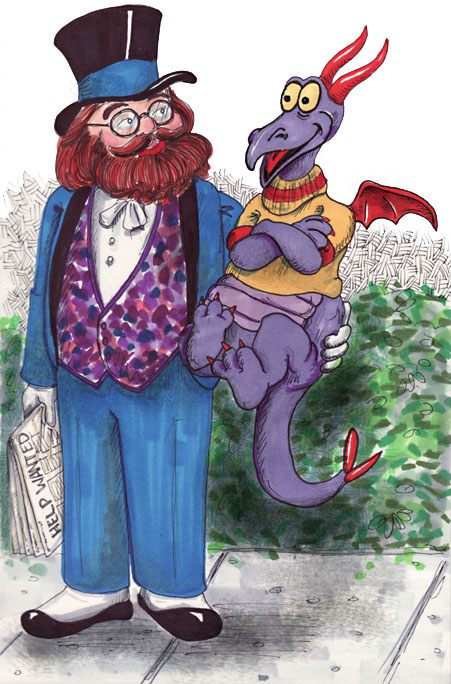 On March 5, 1983, Journey Into Imagination opened in Walt Disney World’s EPCOT Center (as the theme park was known at that time). The ride began with riders boarding their omnimover vehicles that seemed to be floating in the clouds. The clouds would part and riders would see the silhouette of a strange blimp mixed with a vacuum cleaner and hear the humming and singing of its pilot. In the next scene, riders come right next to this vessel and the pilot, an audio-animatronic man with a red beard dressed in a blue suit and top hat. He introduces himself as the Dreamfinder (voiced by Chuck McCann) and he says that he uses his vehicle (called the Dream Mobile or Dream Catcher by some fans) to collect dreams and ideas to create all sorts of new things. Soon he creates a Figment of his imagination: a small, purple audio-animatronic dragon (voiced by Billy Barty). [McCann and Barty previously appeared together in the 1978 film “Foul Play“.] Both of them come up with ideas to fill the “idea bag”. When the idea bag is full, Dreamfinder states that the ideas need to be emptied in the “Dreamport” which he states is “never far away when you use your imagination”. Academy Award winners

The Sherman Brothers (whose compositions include songs from Mary Poppins, Winnie The Pooh, Chitty Chitty Bang Bang and the Disney staple “It’s a Small World”) wrote the song “One Little Spark”, which is played throughout the entire course of the ride.

The omnimovers leave the side of the Dream Mobile and enter the Dreamports storage room, which includes a massive washing machine like device for sorting ideas. Also in the room there are numerous objects including boxed applause, a plasma ball, and a birdcage of musical notes. After leaving the storage room, the ride continues to go through several rooms representing Art, Literature, the Performing Arts and Science.

The Art room was mostly white colored, to represent a massive canvas, and had a large painting Dreamfinder was making using a large fiber optic paint brush, a carousel with giant origami animals, and a pot of rainbows held by Figment.

The Literature room was mostly focused on suspenseful tales and had Dreamfinder playing a massive organ with words coming out of it, words that turned into their meanings, a massive book featuring the raven from Edgar Allan Poes poem cawing menacingly, and books of horrible monsters Figment tried to keep closed.

The performing arts had Figment trying on costumes backstage while Dreamfinder was conducting a laser light show in the manner of an orchestra conductor.

The last room, Science, featured a large machine that Dreamfinder was operating that took a closer look at the workings of nature such as the growth of plants, the formation of crystals from minerals and looking into space.

At the end, Dreamfinder tells Figment and the audience that Imagination is our key to unlock the hidden wonders of our world. The ride then entered the final show scene as our picture is taken as we see Figment surrounded by several movie screens of him being a scientist, a mountain climber, a pirate, a superhero, a tap dancer, a ship captain, a cowboy, and an athlete. Dreamfinder, who is behind a movie camera gives us one last inspiring message and tells us to use our newly found sparks of imagination in the ImageWorks and the on-ride photo is shown to us on a screen next to the camera. This version of the ride closed on October 10, 1998 in order to begin a major renovation.

The ride reopened on October 1, 1999. This version featured Dr. Nigel Channing (played by Monty Python’s Eric Idle) and a considerably-reduced role for Figment. Figment only appeared in filmed cameos in the ride’s queue area and not at all in the actual ride. And Dreamfinder? Dreamfinder was sent packing. This incarnation closed a mere two years later, on October 8, 2001 and went through another rehab.

The current version of the attraction opened on June 2, 2002. Dr. Channing was back, with an altered storyline and Figment returned with a larger role and appeared in every show scene. The song “One Little Spark” also returned with new verses. Dreamfinder, once again, is nowhere to be seen.

Dreamfinder, I believe, is living in a discarded refrigerator box beneath the water bridge that connects Bay Lake and the Seven Seas Lagoon. Throw him a quarter on your next visit to Walt Disney World.