The challenge this week on sugarfrostedgoodness.com is “noir”. 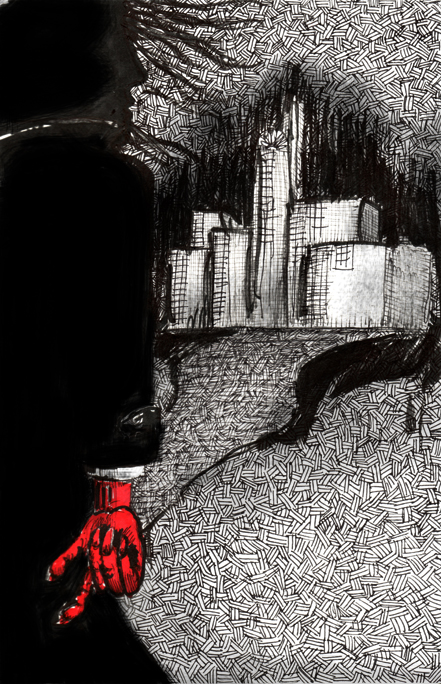 I saw “Scream” a few days ago on one of the many movie channels on cable television. I had seen it several times before. It’s not a great movie, but it is funny the way Wes Craven pokes fun at himself and the genre that made him famous.
The soundtrack features one of my favorite songs, Nick Cave’s “Red Right Hand”.
Nick Cave is an Australian musician, songwriter, author, screenwriter, and occasional actor. He is best known for his work with his band, the Bad Seeds, and his fascination with American music and its roots. He has a reputation, which he disowns and dislikes, for singing dark, brooding songs which some listeners regard as depressing. His music is characterised by intensity, high energy and a wide variety of influences. Cave’s music exhibits his obsessions with religion, death, love, America, and violence with a bizarre, eclectic blend of blues, gospel, rock, and punk. “Red Right Hand”, while obviously falling into the noir category, tells a story that is wide open to interpretation.

Take a litle walk to the edge of town/Go across the tracks
Where the viaduct looms,/like a bird of doom/As it shifts and cracks
Where secrets lie in the border fires,/in the humming wires
Hey man, you know/you’re never coming back
Past the square, past the bridge,/past the mills, past the stacks
On a gathering storm comes/a tall handsome man
In a dusty black coat with/a red right hand

He’ll wrap you in his arms,/tell you that you’ve been a good boy
He’ll rekindle all the dreams/it took you a lifetime to destroy
He’ll reach deep into the hole,/heal your shrinking soul
Hey buddy, you know you’re/never ever coming back
He’s a god, he’s a man,/he’s a ghost, he’s a guru
They’re whispering his name/through this disappearing land
But hidden in his coat/is a red right hand