The challenge this week at Monday Artday is “underground”. 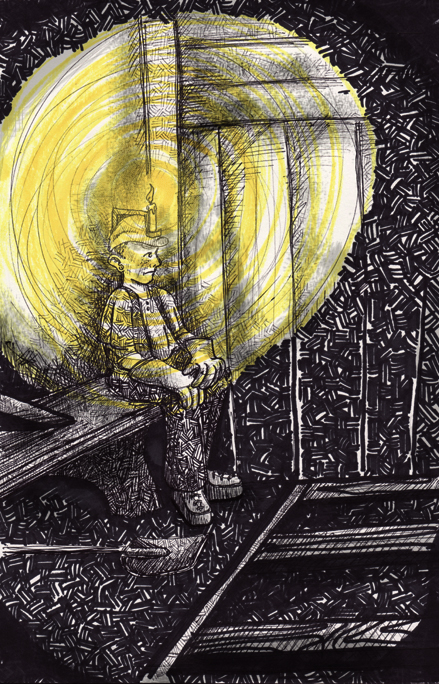 Vance Palmer was born September 16, 1893. In the early twentieth century, hundreds of boys like Vance worked as “door boys” or “nippers” in coal mines. Door boys were never over fourteen years of age and sometimes as young as ten. The work of the door boy was monotonous. He had to wake early, dress in clothes that were usually dirty with soot, and be in the mine when the first trip of coal cars entered in the morning. He would need to remain in the mine until the last car came out at night. The door boys’ duty was to open and shut the door as men and coal cars pass through the door, which controls and regulates the ventilation of the mine. That meant sitting alone in a dark mine passage hour after hour, with no human soul near; to see no living creature except the mules as they passed with their loads, or a rat or two seeking to share his meal. It meant standing in water or mud that covered the ankles, chilled to the bone by the cold drafts that rushed in when the trap door was opened for the mules to pass through. It meant working for fourteen hourswaitingopening and shutting a doorthen waiting again. Passing the time by reading was not an option for door boys, as the only light came from their helmet candle. Whittling and whistling were the boy’s chief recreations. Door boys would sometimes fall asleep at their post and fail to open their assigned door. In the darkness, a coal car would crash into the closed door, thus slowing down the mining process. And sometimes, a door boy would be killed by a speeding coal car, while attempting to cross the tracks in the darkness.
The door boy’s wages would vary from sixty five to seventy five cents a day, and from this he provided his own lamp, cotton and oil or candle.