The illustrationfriday.com challenge this week is “multiple”. 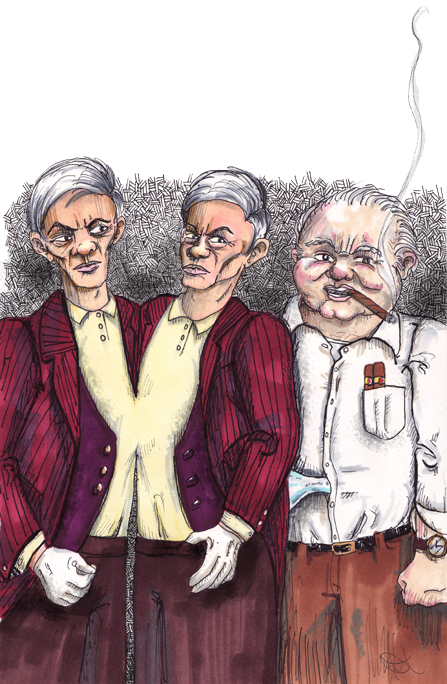 One of the most famous and interesting medical anomalies is the world’s only conjoined triplets, Chang and Eng and Archie Bunker. Conjoined twins are a rare phenomenon. It is estimated to occur from 1 in 50,000 births to 1 in 200,000 births. However, there is only one case of conjoined triplets on record.
Chang and Eng were born in May 1811 in the province of Samutsongkram in Siam (now Thailand). Archie, curiously, was born in the Queens borough of New York City in January 1971, nearly 160 years later. Chang and Eng were joined at the sternum by a small piece of cartilage. Their livers were fused but independently complete. Although 19th century medicine did not have the means to do so, modern surgical techniques would have easily allowed them to be separated today. Archie was attached to Eng by a cathode ray tube (CRT).
Chang and Eng and Archie lived productive lives. Chang and Eng, after touring the world with P.T. Barnum, retired and settled in White Plain, North Carolina, near Mount Airy. Chang and Eng married sisters Adelaide and Sarah Anne Yates. Chang and his wife had ten children; Eng and his wife had twelve. During the American Civil War Chang’s son Christopher and Eng’s son Stephen both fought for the Confederacy. Many of their descendants still live in the Mount Airy area.
Archie took a different course than his conjoined brothers. He grew up during the depression. He served with the United States Army Air Corp in Foggia, Italy in World War II (The Big One). He married the former Edith Baines and they had one child, Gloria, who much to Archie’s chagrin, married a meathead. Unlike his brothers, Archie held many jobs, including Loading Dock Foreman, Janitor, Taxi Driver and finally, Bar Owner.
Eng and Chang died in January 1874, at the age of 63. Chang preceded Eng in death by about two and a half hours. An autopsy indicated that Chang died of a blood clot in the brain; and at the time Eng’s demise was attributed, understandably, to shock.
In 1983, Archie didn’t die, so much as he was canceled.