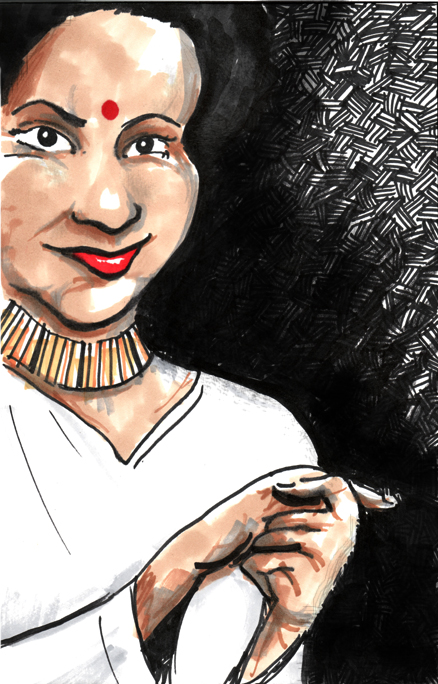 Asha Bhosle is an Indian singer, best known as a Bollywood playback singer. A playback singer is a singer whose singing is prerecorded for use in movies. Playback singers record songs on soundtracks, and actors or actresses lip-sync the songs for cameras.
Her career started in 1943 and has spanned over six decades. She has done playback singing for over 950 Bollywood movies. She is the sister of the equally accomplished Lata Mangeshkar.
Bhosle is considered one of the most versatile South Asian singers  her range of songs includes film music, pop, ghazals, bhajans, traditional Indian Classical music, folk songs, qawwalis, Rabindra Sangeets and Nazrul Geetis. She has sung in over 14 languages including Hindi, Urdu, Telugu, Marathi, Bengali, Gujarati, Punjabi, Tamil, English, Russian, Czech, Nepali, Malay and Malayalam.
Asha Bhosle is believed to have sung over 12,000 songs. Though her sister, Lata Mangeshkar was featured in the Guinness Book of World Records during 1974-1991, for having sung the most songs in the world, reputed sources have introduced concerns to its veracity, claiming that the Guinness counts were exaggerated and Bhosle has recorded more songs than Mangeshkar.

CLICK HERE to hear the Cornershop song that was inspired by Asha Bhosle.