The Illustration Friday challenge this week is “100%“. 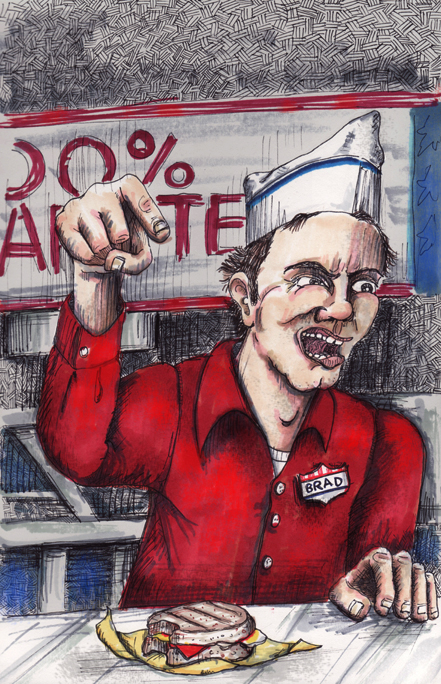 1982’s Fast Times at Ridgemont High was based on Cameron Crowe’s undercover exposé of high-school life. Crowe (who went on to write and direct Jerry Maguire and Almost Famous, for which he won an Oscar for Best Screenplay) went back to his alma mater, infiltrating the everyday life of the current student body. His character, although featured prominently in the book, was eliminated for the movie.
Fast Times was the starting point for many of Hollywood’s productive careers, including three Academy Award winners  Sean Penn as stoned surfer Jeff Spicoli (2004 Best Actor for Mystic River), Nicolas Cage [billed under his real name Nicolas Coppola] in the tiny role as “Brad’s Bud” (1996 Best Actor for Leaving Las Vegas) and Forest Whitaker as football star Charles Jefferson (2007 Best Actor for The Last King of Scotland). The film also showcased early performances by Vic Morrow’s daughter and noted silver screen nutcase Jennifer Jason Leigh (Backdraft; Dolores Claiborne), Eric Stoltz (originally cast as Marty McFly in Back to the Future), Anthony Edwards (Revenge of the Nerds; eight seasons as Dr. Greene on ER), Amanda Wyss (Freddie Kreuger’s first victim in A Nightmare on Elm Street) and Pamela Springsteen (Bruce’s sister and Sean Penn’s former fiancé). Veteran actor Ray Walston turned in a terrific performance as the perpetually suspicious Mr. Hand, the geography teacher with a Hawaii fixation. It also featured a memorable scene with the future Mrs. Kevin Kline, Phoebe Cates, that became the making of fantasies for many a 1980s adolescent boy.
Beverly Hills Cop and The Santa Clause’s Judge Reinhold (the “close talker” from Seinfeld) gave one of Fast Times’ funniest performances as Brad Hamilton, the senior with big plans, if he could only get out of his minimum-wage job. Brad worked as fry cook par excellance at All American Burger. Brad prided himself on “selling no fry before its time”. While Brad usually worked in the kitchen, when the regular counter guy was in the bathroom, Brad had no choice but to face the customers. All American Burger offered a “100% Guaranteed Breakfast”, the best breakfast you ever ate or your money back!
This encounter occurred:

BRAD (nervously): May I help you?
BUSINESSMAN (returning his half-eaten breakfast): Yes. This is not the best breakfast I ever ate. And I want my money back.
Brad begins searching under the counter.
BRAD: Well, I believe you have to fill out a form. There’s a pad right around here.
BUSINESSMAN: No. I want my money back right now.
BRAD: Well, that’s not the way it works, really. And you ate most of your food already, too…
BUSINESSMAN: See that sign? It says 100% Money Back Guarantee. Do you know the meaning of the word ‘guarantee’? Do they teach you that here? Give me my money back.
BRAD: I can’t do that. But if you wait a minute…
BUSINESSMAN (as if talking to a kindergartener): Look. Just put your little hand back in the cash register and give me my $2.75 back. Okay? (He looks at Brad’s name tag.) Please, Brad?
BRAD: I’m sorry, sir. Just let me find the forms here.
BUSINESSMAN: I am so tired. I am so tired of dealing with morons. How hard is it to…
BRAD: Mister, if you don’t shut up, I’m gonna kick 100% of your ass.