The challenge word on Monday Artday this week is “cowboy“. 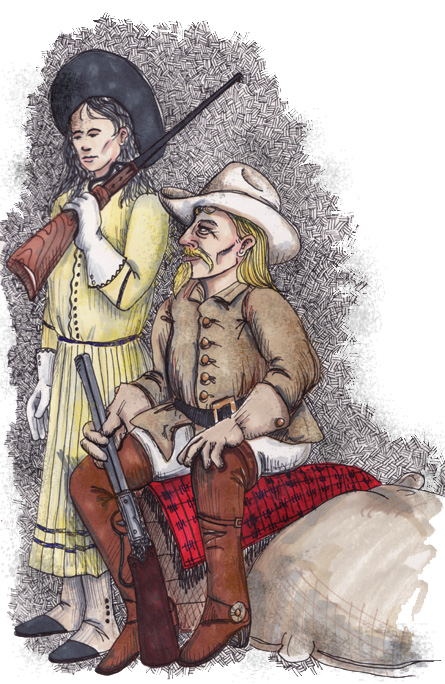 William Frederick Cody was an American soldier, bison hunter and showman. He was one of the most colorful figures of the Old West, and mostly famous for the shows he organized with cowboy themes. Cody got his nickname, “Buffalo Bill”, for supplying Kansas Pacific Railroad workers with bison meat. In addition to his documented service as a soldier during the Civil War and as Chief of Scouts for the Third Cavalry during the Plains Wars, Cody claimed to have worked many jobs, including as a trapper, bullwhacker, “Fifty-Niner” in Colorado, a Pony Express rider in 1860, wagonmaster, stagecoach driver, and even a hotel manager, but it’s unclear which claims were factual and which were fabricated for purposes of publicity. He became world famous for his Wild West show. “Buffalo Bills Wild West” used real cowboys and cowgirls, recruited from ranches in the West. At first, few people shared Cody’s admiration of the cowboys. Most people regarded them as coarse cattle drivers and used the term “cowboy” as an insult. The shows demonstrated bronco riding, roping, and other skills that would later become part of public rodeos.
As a businessman, he invested in projects that he hoped might bring economic growth to the West. With his earnings he invested in an Arizona mine, hotels in Sheridan and Cody, Wyoming, stock breeding, ranching, coal and oil development, film making, town building, tourism, and publishing. In 1899, he established his own newspaper, the Cody Enterprise, which is still the main source of information for the town of Cody today. Taking advantage of his celebrity status, Cody was an early advocate of women’s suffrage and the just treatment of American Indians.
By the turn of the 20th century, William F. Cody was probably the most famous American in the world. No one symbolized the West for Americans and Europeans better than Buffalo Bill. He was consulted on Western matters by every American president from Ulysses S. Grant to Woodrow Wilson. He counted among his friends such artists and writers as Frederic Remington and Mark Twain.

Phoebe Ann Mosey, better known as Annie Oakley, was an American sharpshooter and exhibition shooter. Oakley’s amazing talent and luck led to a starring role in Buffalo Bill’s Wild West show, which propelled her to become the first American female superstar. However, at the height of her career, newspaper magnate William Randolph Hearst published a false story that Oakley had been arrested for stealing to support a cocaine habit. The story spread and newspapers everywhere reprinted the account. Oakley spent much of the next six years winning libel lawsuits against newspapers. She collected less in judgments than were her legal expenses, but to her, a restored reputation justified the loss of time and money. Annie continued to set records into her 60s, and she also engaged in extensive philanthropy for women’s rights and other causes, including the support of specific young women that she knew. In a 1922 shooting contest, sixty-two-year-old Annie hit 100 clay targets from 16 yards. After her death it was discovered that her entire fortune had been spent on her family and her charities.