The challenge word this week on Monday Artday is “bird”. 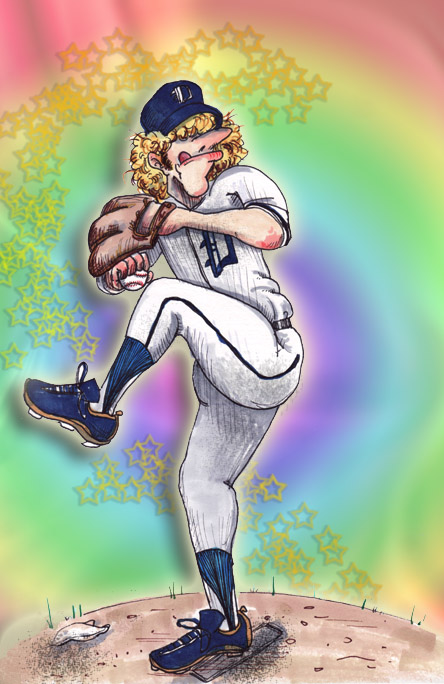 Tall, lanky Mark Fidrych was a certified flake. “The Bird”, as he was affectionately known because of his resemblance to Sesame Street’s Big Bird, pitched for the Detroit Tigers from 1976 until 1980. That tumultuous five year run began with Fidrych being named Rookie of the Year and ended with an undiagnosed and untreated torn rotator cuff that never healed. But in between, Fidrych was a character. He made the Tigers as a non-roster invitee out of the 1976 spring training. He made his first start because the scheduled starting pitcher had the flu. Fidrych responded by throwing seven no-hit innings, ending the game with a 2-1 victory in which he only gave up two hits. That season, he went on to win a total of 19 games, led the league in ERA and complete games, was the starting pitcher in that year’s All-Star Game, won the American League Rookie of the Year Award, and finished second in voting for the Cy Young Award.

But it was his on-field antics that endeared Fidrych to his fans. He would crouch down on the pitcher’s mound, talk to himself, talk to the ball, aim the ball like a dart, strut around the mound after every out, and throw back balls that “had hits in them,” insisting they be removed from the game. He would make sincere statements like “Sometimes I get lazy and let the dishes stack up, but they don’t stack too high. I’ve only got four dishes.” and “That ball has a hit in it, so I want it to get back in the ball bag and goof around with the other balls in there. Maybe it’ll learn some sense and come out as a pop-up next time.” Every time he pitched, Tiger Stadium was jam-packed with adoring fans. In his 18 starting appearances in 1976, attendance equalled almost half of the entire season’s 81 home games. He appeared on the cover of numerous magazines, such as Sports Illustrated, The Sporting News, and became the first athlete to appear on the cover of Rolling Stone. At the end of his rookie season, the Tigers gave him a $25,000 bonus and signed him to a 3-year contract worth $255,000. It was estimated that the extra attendance Fidrych generated around the league in 1976 was worth more than $1 million.

Injury ended Fidrych’s career. At the end of the 1981 season, Detroit gave Fidrych his outright release and he signed as a free agent with the Boston Red Sox, playing for one of their minor league teams. However, his unhealed torn rotator cuff forced him to retire at age 29.

Fidrych lives with his wife and daughter in Northborough, Massachusetts. Aside from fixing up his farmhouse, he works as a contractor hauling gravel and asphalt in a ten-wheeler and his family owns and runs a diner.

UPDATE: On April 13, 2009, Joseph Amorello, owner of a road construction company who occasionally hired Mark to haul gravel, stopped by Mark’s farm to chat. He found Mark, dead, beneath his 10-wheeled dump truck. He had been doing repairs on the truck and suffocated after his clothes became entangled with a spinning mechanism on the truck’s underside.