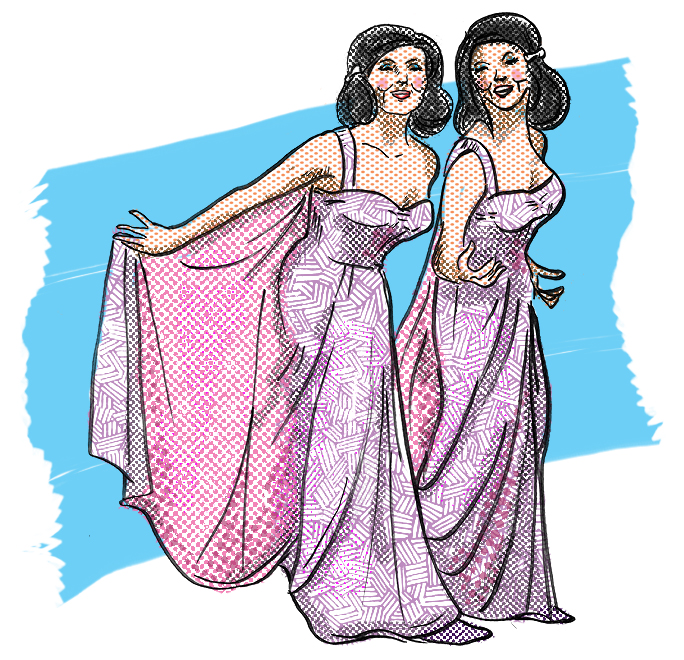 Minnie and Clara Bagelman began their singing career on a New York radio show called “Uncle Norman,” which was geared towards children. This led to the sisters making some recordings for RCA Records in the early 1930s. Their records, which were recorded in Yiddish, had limited appeal and sold mostly to the fans of New York’s Yiddish Theater. However, in 1937, the renowned Andrews Sisters had a hit with the Yiddish song “Bei Mir Bistu Shein.” Musician and impresario Dick Manning (born Sam Medoff) latched on to the song’s popularity and featured The Bagelman Sisters on his “Yiddish Melodies in Swing” radio program — except he changed their names to “Merna and Claire” and altered their last name to “Barry.”

For over a decade, the Barry Sisters performed on Manning’s show. They also toured the country, singing Yiddish interpretations of jazz standards and popular songs. Their style was a noted departure from other acts cultivated in the Yiddish theater. The Barry Sisters were glamourous and showy, wearing evening gowns and sporting current hair-dos. The Barry Sisters appeared on The Jack Paar Show, The Tonight Show with Johnny Carson and The Ed Sullivan Show. They were regular performers at resorts in the Catskill Mountains, usually accompanying bandleader Mickey Katz. They entertained American troops and were one of the few American acts allowed to tour the Soviet Union in the late 1950s. Their popularity even brought them to entertain Israeli troops during the Yom Kippur War in 1973.

Merna and Claire released their final album in 1973 and soon after, Merna developed a brain tumor. The pair ceased performing. Merna passed away in 1976 at the age of 53. Claire cut back on her singing after her sister’s death. She made rare appearances over the years, including taking the stage at Carnegie Hall with singer Neil Sedaka. Despite suffering from declining health, specifically macular degeneration, she sang with the power and grace of her earlier performances. Claire passed away in 2014 and the age of 94. She survived her younger sister by 38 years.