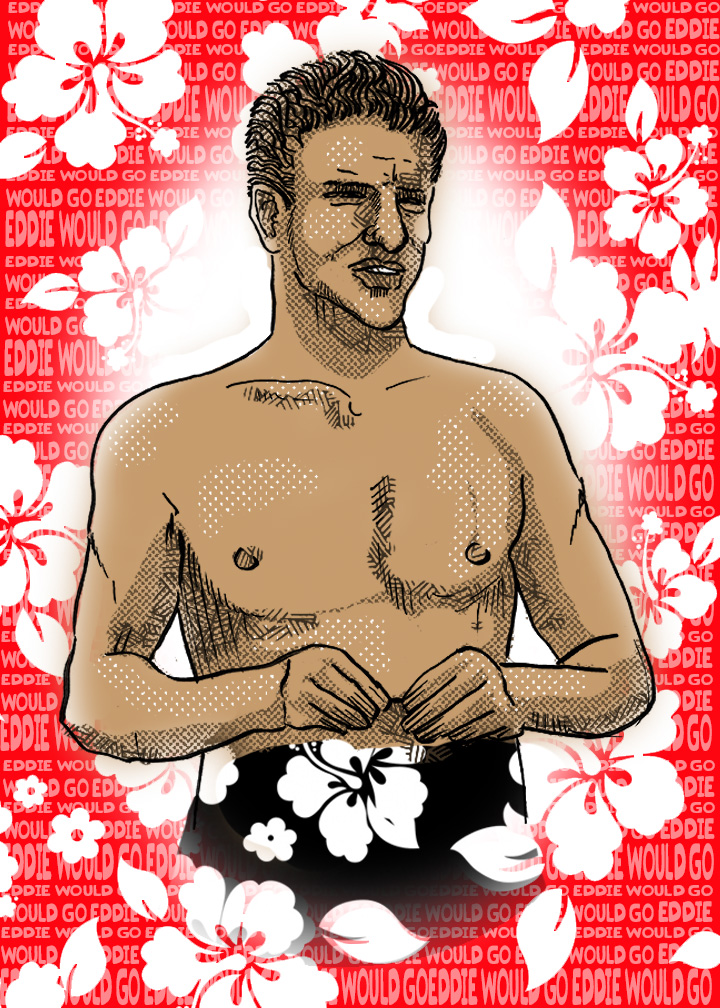 A descendant of Hewahewa, the high priest of King Kamehameha I and his successor Kamehameha II, Eddie Aikau took up surfing at a young age. He dropped out of high school and took a job at the Dole pineapple cannery in O’ahu. With his first paycheck, he bought his own surfboard.

At 22, he was hired by the municipality of Honolulu as a lifeguard, the first for the city. He was assigned a large swath of beach at Waimea Bay, on the North shore of O’ahu. Under Eddie’s watch, not a single life was lost. In addition, he saved over 500 errant swimmers. In 1971, he was named Lifeguard of the Year.

Practicing his surfing during any available spare time, Eddie entered and won the top prize at the 1977 Duke Kahanamoku Invitational Surfing Championship. In 1978, just after his win, Eddie joined up with the Polynesian Voyaging Society for an educational expedition following route of the Polynesian migration between the Hawaiian and Tahitian islands. When the journey began, the traditional double-hulled canoe sprung a leak, eventually capsizing twelve miles off the southern coast of the island of Molokaʻi. The always brave and resourceful Eddie mounted his trusty surfboard and began to paddle in the direction of the island of Lana’i. Sometime later, the drifting crew was rescued by the US Coast Guard. Eddie’s life jacket was recovered and it was surmised he had removed it to accelerate his paddling. Despite the largest air-sea search in Hawaiian history, Eddie was never found. He was 31 years old.