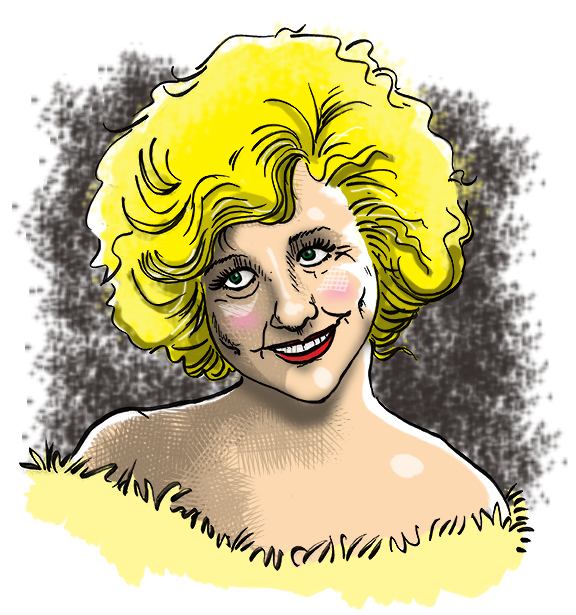 With coaching and encouragement from her mother, Katherine Grant entered — and won — the 1922 “Miss Los Angeles Beauty Contest.” Her new-found fame landed her roles in several of Hal Roach’s “Little Rascals” comedy shorts. As the winner of the local beauty contest, Katherine entered the “Miss America” pageant, but lost to Mary Katherine Campbell, the only person to win the title of “Miss America” twice. (She was named first runner-up in her third showing and the rules were changed going forward.)

Before her pageant days, Katherine had posed for a sculptor who was contracted to create a fountain. Katherine was photographed in the nude for figure studies. During her time in Atlantic City for the “Miss America” pageant, she discovered some of the photographs, which she believed were for use solely by the sculptor, circulating around town. She approached the photographer, upon her return to Los Angeles, and demanded all copies of the nude images. She was shown a release form bearing her signature. At the time she signed it, she assumed the paper was a receipt for the payment she was given for posing. She left the photographer’s office dejected. Soon after, Katherine was contacted by another man, threatening to show the photos to Hal Roach, thus ruining her career. She hired a lawyer who brought charges of fraud, extortion and blackmail against the photographer. Although no documents relating the outcome of the case exist, events must have been in her favor, because Katherine’s career for Roach Studios was fairly successful.

In December 1925, Katherine was the victim of a hit-and-run while crossing an intersection near Roach Studios. The driver was never identified or caught. Katherine displayed no physical injuries after an examination, though doctors warned her to rest. She refused, fearing an absence from the screen would damage her career.

Six months later, she was discovered in a sanatorium under an assumed name, suffering from an emotional and physical breakdown. She was exhausted and was not eating well. She was concerned about the studios’ demand that she maintain her weight. Eventually she was released to her mother’s care, but soon found herself back in the hospital. Her condition worsened and Katherine passed away from a combination of tuberculosis and dementia. She was 32.

Katherine was interred at Evergreen Cemetery in Los Angeles. Her grave remained unmarked for 79 years, until a headstone was purchased by a fan who runs a blog highlighting the careers of silent movie stars.