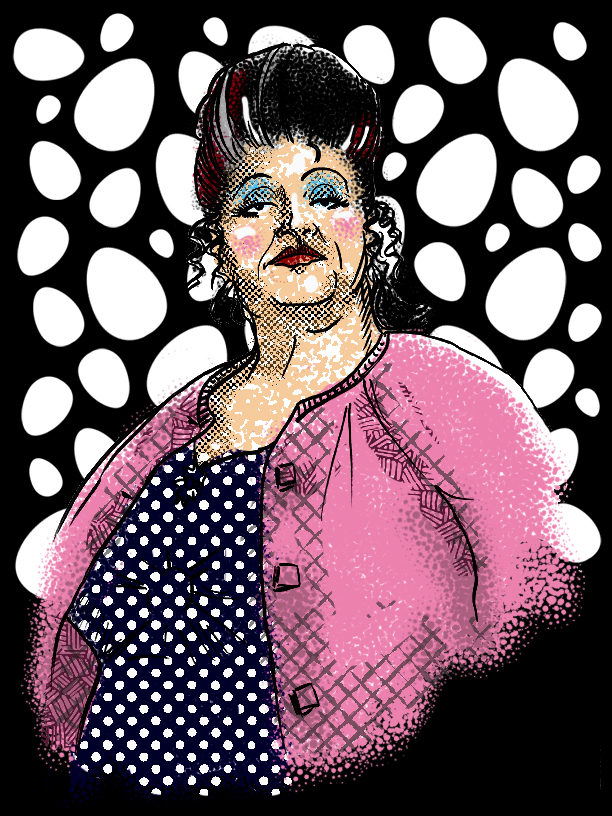 One day, a New York City couple dropped several of their ten children off at an orphanage and left… never to be seen by their abandoned children again. One of those kids was Edith Massey.

Edith wound up in a foster home, where she endured cruel treatment. She put up with it as long as she could. As a teenager, she ran away to Hollywood with dreams of becoming a movie star. She became a barmaid instead. She married a soldier just after World War II, but she grew restless with married life and took off once again. She found herself in Baltimore, tending bar at a hotel. A customer — aspiring film maker John Waters — offered her a role in a project he was working on — an off-beat black comedy called Multiple Maniacs. Edith accepted the dual role of a barmaid and the Virgin Mary in a fantasy sequence. She soon quit her job at the hotel and opened a thrift shop. She also took roles in Waters’s subsequent productions, including her most memorable (and outrageous) performance as “Edie the Egg Lady” in the cult classic Pink Flamingos. Riding her popularity, Edith formed a punk band featuring future Go-Go’s drummer Gina Schock. Edie and the Eggs covered the Four Seasons’ “Big Girls Don’t Cry” and toured the country, sometimes in support of Waters’s film premieres. Her underground fame grew, as Edith posed for a series of risqué greeting cards. Using her earnings from her acting, Edith opened another thrift store, this one in Venice, California, where she stayed when it got too cold in Baltimore. Edith even appeared in a music video with John Cougar Mellencamp, as well as appearing on the cover of his 1980 album, Nothin’ Matters and What If It Did.

In an attempt to branch out, she auditioned for her first non-John Waters film — Paul Bartel’s Western spoof Lust in the Dust. However, Edith became ill prior to filming and had to drop out. She passed away in 1984 from complications related to cancer and diabetes. Edith was 66. A more unlikely star there never was.