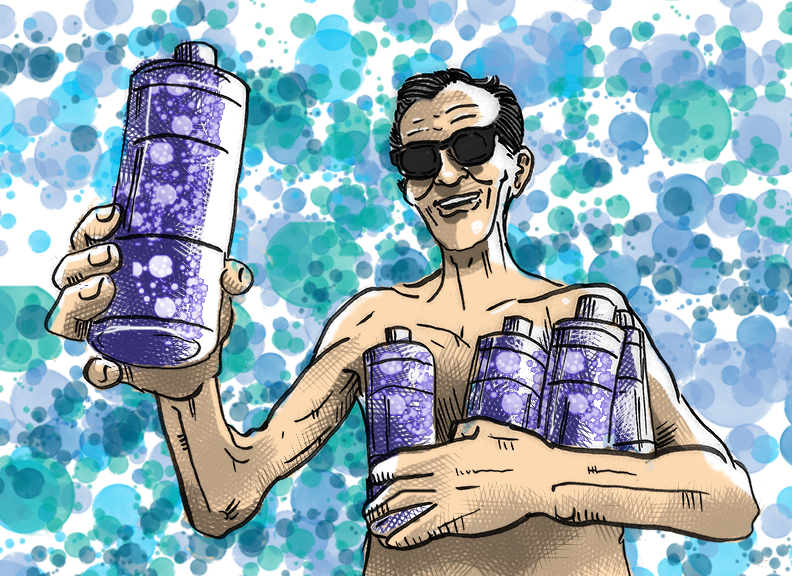 Emanuel Heilbronner emigrated from his native Germany in 1929, dropping the “Heil” from his surname to avoid any association with the Nazis. He begged his parents to follow him to the United States, but they refused. His last correspondence from his parents was in the form of a censored postcard reading: “You were right – your loving father.” They were murdered in a concentration camp.

Emanuel Bronner continued his family business by producing soap in his home. The bottles sported labels crammed with Bronner’s philosophy, which he called “All-One-God-Faith.” He quoted a variety of sources including the Old and New Testaments, Rudyard Kipling, Thomas Paine, Jewish sage Hillel the Elder and Jesus, whom he referred to as “Rabbi Jesus.” The passages on the soap bottle labels were often log and rambling, fraught with hyphens and an abundance of exclamation marks.

In 1946, Emanuel was invited to the University of Chicago by a student group to lecture on his so-called “Moral ABC” philosophy. He was arrested for speaking without a permit and committed to a Chicago area mental hospital. After several electroshock treatments, Emanuel escaped.

He moved around the country, finally settling in Escondido, California, where his soap-making operation grew into a small factory. Emanuel passed away in 1997 at the age of 89. At the time, his factory was producing over a million bottles of soap annually. The company, still going strong, is run by Emanuel’s grandson David.