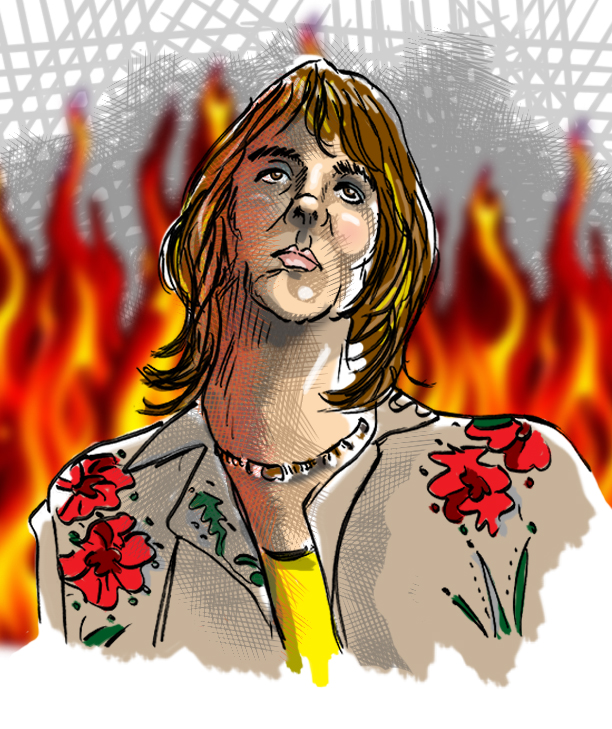 In the summer of 1973, while attending the funeral of Clarence White, a musical colleague and member of the country-rock band The Kentucky Colonels, Gram Parsons, the singer-songwriter-guitarist who was influential in the “alt-country genre,” instructed his friend and manager Phil Kaufman to cremate his body at Joshua Tree National Park when his time came. He wanted his ashes spread at the Cap Rock site at the park, which was a favorite spot of the singer. Little did he know that time would come just a few months later. In September, Gram Parsons overdosed on morphine and alcohol in Room 8 of the Joshua Tree Inn.

In a series of clumsy, ill-conceived incidents, Kaufman intercepted Gram’s body at the Los Angeles Airport (in a stolen hearse) and drove it back to Joshua Tree to fulfill the singer’s last wishes. However, nearby campers reported the heavy smoke from the make-shift “cremation.” The remains were retrieved and Phil was arrested a few days later. He was fined $750 for the theft of the coffin. (At the time, there were no laws on the books regarding the theft of a corpse.) What was left of Gram’s body was returned to his stepfather for a burial in New Orleans, which was later revealed to be an ulterior motive in order to lay claim to Gram’s chunk of a family inheritance.

When I was doing research for this story, I stumbled upon a number of reviews on Trip Advisor for the Joshua Tree Inn, which is still in operation. The hacienda-style hotel is situated on a desolate stretch of Twentynine Palms Highway in the Mojave Desert, just north of Palm Springs and offers homey accommodations for visitors to the national park, as well as rock and roll curiosity seekers. The infamous Room 8 is available for those who need a personal connection to Gram Parsons. The room is marked with a guitar-shaped sculpture outside. The interior, however, is completely redecorated, save for a large mirror that management notes: “where Gram Parsons saw the last glimpse of himself.” How eerie.

The Trip Advisor website is a source of valuable information, in addition to being unintentionally entertaining. Personally, I love to browse the “terrible” reviews* given to hotels by angry guests looking for an outlet to vent their frustrations of a “less than satisfactory” lodging experience. A few years ago, while searching for a hotel in Anaheim, California, I read a review for a particular establishment that, along with the usual complaints about cleanliness and service, claimed the place was haunted. I began to read the current reviews for the Joshua Tree Inn, narrowing the criteria to only those in the “Terrible” category. The filter yielded twelve reviews. As I read, I noticed that a member of the hotel’s staff had left a response to nearly every review, addressing the concerns and complaints noted in each. While the hotel doesn’t have the capability to remove a bad review, it is offered a platform for rebuttal and clarification.

In 2012, a disgruntled traveler from Atlanta, Georgia levied a “terrible” review against the Joshua Tree Inn. They began their assessment by saying that they should have opted to stay at the Holiday Inn Express down the street. Then, they laid into the place, complaining about the out-of-date decor and the “brick-hard” mattress that also squeaked. They mentioned the paper-thin walls, allowing guests to hear everything that was going on in adjoining rooms. They went on to gripe about the thermostat, the bathroom lighting and even the complementary breakfast, which they described as “a half jug of milk and some old bagels.” They did, however, praise the landscaping, specifically the lovely and fragrant lilacs that are planted throughout the property. On the whole, the review was scathing. Although there are 134 “Excellent” reviews, one would think twice about staying at the Joshua Tree Inn after reading this.

A month after the Atlanta traveler unleashed his venomous diatribe, “jtinn,” identified as the Joshua Tree Inn’s “Guest Relations Manager,” offered this reply:

Mistaken identity. Review is not of the Joshua Tree Inn. We do not have bagels or jugs of milk, or lilacs, or noisey [sic] beds There is no Holiday Inn Express down the road. Nor have we had a couple from Atlanta, Ga. in April or anytime this year.
Clearly you have confused us with an inn in 29 Palms.

The 29 Palms Inn is 16 miles away from the Joshua Tree Inn. It is also a hacienda-style hotel with a big, identifying sign out front. It has a similar variety of good and bad reviews on Trip Advisor. Maybe the folks from Atlanta were taking their “Gram Parsons” pilgrimage a bit too seriously and dipped into the hallucinogenics.