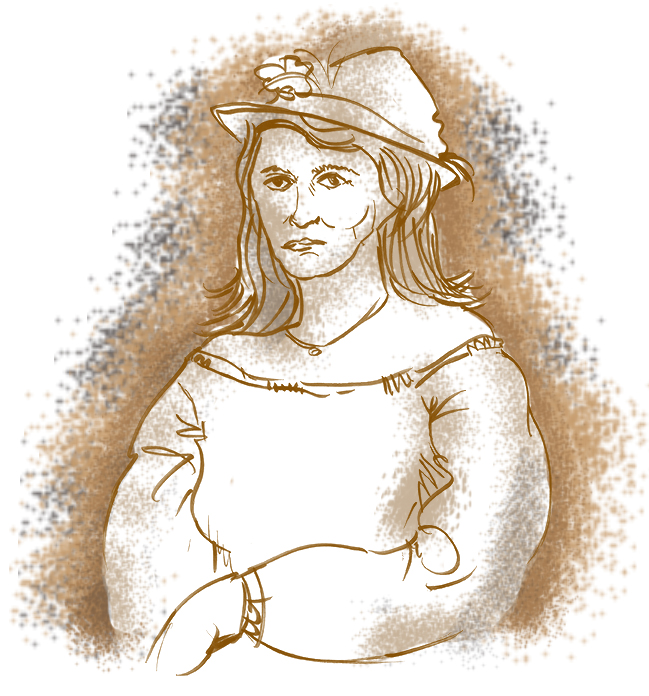 If you’re going to believe a made-up story about a strong and inspiring woman during the Revolutionary War, forget the one about Betsy Ross. Here’s the story of Nancy Hart.

According to various accounts, Nancy Hart and her husband Benjamin lived near Savannah, Georgia with their eight children. Nancy was a strong and resourceful woman, providing for her family through her skills as a hunter and herbalist. She was known by most to be fearless, as well as ruthless. She never hesitated to exact vengeance on those who offended her or meant to bring harm to her family. She also possessed a short and furious temper.

One morning, a group of six British soldiers forced their way into the Hart home looking for food. They demanded that Nancy kill and cook one of her turkeys, and she reluctantly agreed. When the bird was prepared and served, the soldiers lay their guns by the door before sitting down at the table to eat. While they were eating, she covertly slid their weapons out of the house through a hole in the wall of the cabin. She picked up the last gun and took aim at the soldiers, ordering them to remain still. One of the soldiers ignored her threat. When he stood, Nancy shot and killed him. Another soldier made a move towards her and she shot and killed him as well. She held the remaining four soldiers at bay until her husband and several neighbors arrived to assist. Benjamin wanted to shoot the four men, but Nancy insisted that they be hanged…. and she intended to do just that.

In 1912, a construction crew working on a railroad in the area uncovered evidence to support “The Legend of Nancy Hart.” During excavation of land less than a mile from the former site of the Hart homestead, workers found six skeletons buried neatly in a row. A few of the skeletons’ necks were broken, which suggested they had been hanged. Further investigation determined that they had been buried for at least 100 years.

Hart County, in northeastern Georgia, is named in Nancy’s honor.