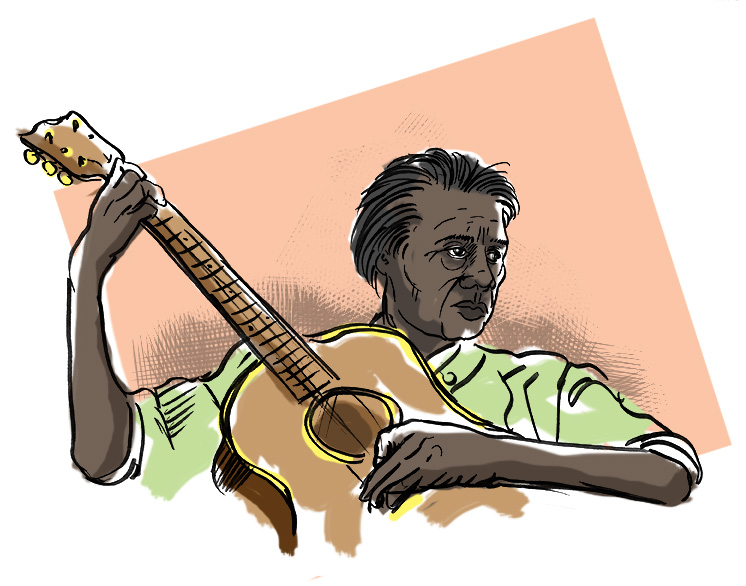 At 11 years old, Elizabeth Cotten scraped together three dollars and seventy-five cents and purchased a guitar from Sears & Roebuck. It was a right-handed model, so the young, aspiring musician turned it upside-down to play, as she was left handed. She developed her own unorthodox playing style, using her fingers to play bass lines and her thumb to pick out the melody. Her family noted, from that point forward, no one in the house got any rest from Elizabeth’s constant playing. As a teenager, she was performing and writing songs.

But then, she stopped to take a job at local department store. One day in the store, Elizabeth was befriended by folk music composer Ruth Seeger when she discovered Ruth’s daughter Peggy wandering unaccompanied. Elizabeth began working as a maid for the Seeger family. Here, she met Ruth’s children, including Mike and his half-brother Pete. A conversation with Mike prompted Elizabeth to pick up the guitar again. Mike began recording Elizabeth performing some of her own compositions, including her signature “Freight Train.”

In the 1960s, Elizabeth performed regularly on the folk music circuit. Her songs were covered Joan Baez, Jerry Garcia, Peter, Paul and Mary, Taj Mahal and many others. Elizabeth won a Grammy in 1984 for Best Traditional Recording. She loved performing and did so until a few weeks before her death in 1987 at the age of 94.

A story has been circulating around the internet about Elizabeth Cotten’s composition “Shake Sugaree.” The story goes that Elizabeth was working as maid for a Dead Head when he discovered that the band’s recording of the song “Sugaree” offered no credit or compensation to its author. He allegedly fought a legal battle until Elizabeth was given rightful acknowledgment and royalties for the song. This story is not true. The Dead’s song “Sugaree” bears little resemblance to Elizabeth Cotten’s song, aside from the name, which was just a nod to Elizabeth by Grateful Dead lyricist Robert Hunter.