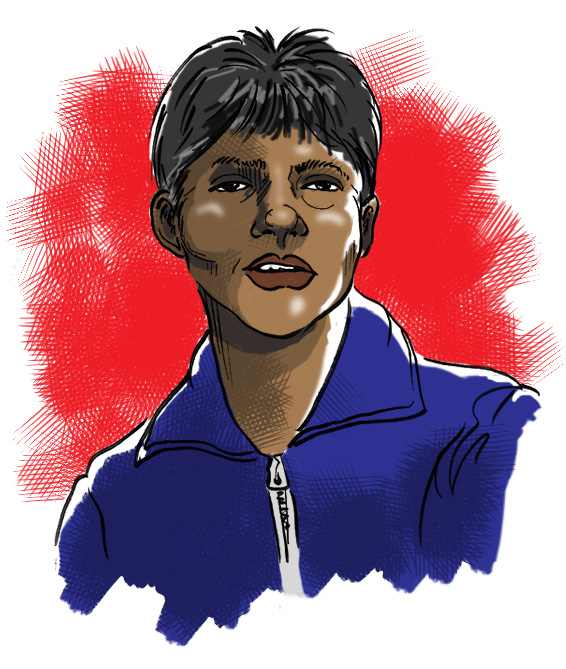 Wilma Rudolph was born prematurely with a birth weight of 4-and-a-half pounds. She suffered from several early childhood illnesses, including pneumonia and scarlet fever. At the age of five, she contracted infantile paralysis, caused by the polio virus. Although she recovered from polio, Wilma lost strength in her left leg and foot. Physically disabled for much of her early life, Wilma wore a leg brace until she was twelve years old.

She never let any of those setbacks stop her.

At the 1956 Summer Olympics in Melbourne, Australia, Wilma won a bronze medal in the 4 x 100-meter relay. Four years later, at the Olympic games in Rome, she won three gold medals in the 100 and 200-meter individual events and the 4 x 100-meter relay. She became the first American woman to win three gold medals in a single Olympics. She was also touted as “The Fastest Woman in the World.”

When Wilma returned home to Clarksville, Tennessee, her success was celebrated with “Welcome Wilma Day” on October 4, 1960. It was a day filled with festivities, including a huge banquet in her honor. On Wilma’s insistence, the parade and banquet became the first, fully-integrated city-sponsored event in the history of Clarksville.

In later years, using her fame, Wilma campaigned for civil rights and, in 1963, the mayor of Clarksville announced that all of the city’s public facilities, including restaurants, would become fully integrated.

At 54, Wilma was diagnosed with cancer, which spread rapidly. She passed away in 1994. Thousands of mourners attended her memorial. In 1984, the Women’s Sports Foundation selected Wilma as one of the five greatest women athletes in the United States. Two years after her death, the foundation presented its first Wilma Rudolph Courage Award to another Olympic gold medalist, Jackie Joyner-Kersee.