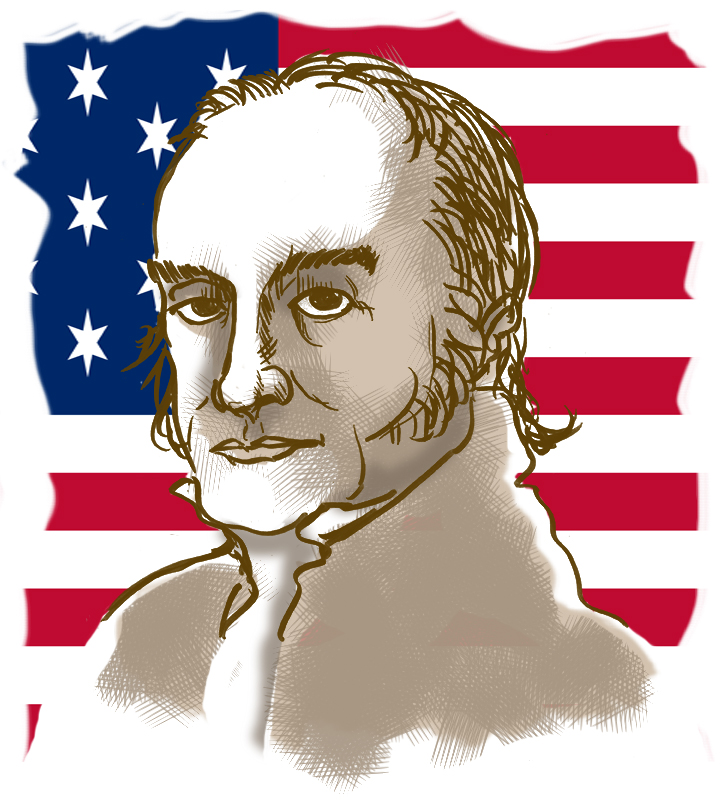 Please open your American History books and turn to the chapter about Francis Hopkinson. What? You can’t find that chapter? You can’t even find a mention of his name? Disgraceful. Francis Hopkinson’s contributions to the fledgling United States were as important and as symbolic as the Liberty Bell or the bald eagle. Oh…. wait a second…. you probably know that made-up story about Betsy Ross, don’t you? Well, let me set you straight…

Philadelphia native Francis Hopkinson  enrolled in the first class at the College of Philadelphia (now the renowned University of Pennsylvania) and graduated in 1757. As a member of the Provincial Council of Pennsylvania, Francis drafted treaties with the Delaware and Iroquois tribes. Later, he was appointed customs collector in Salem, New Jersey with hopes of hopes of becoming commissioner of customs for North America. After an unsuccessful bid for that position, Francis left public service, married and eventually opened a dry good business in Philadelphia.

He returned to government as a member of the New Jersey Provincial Council, representing the Second Continental Congress in 1776, where he signed the Declaration of Independence. Later in the year, he resigned his provincial position to serve on the Navy Board in Philadelphia. Francis was soon named the Navy Board’s chairman. He was present at the convention in 1787 as one of the many to ratify the Constitution. During his time in the service of the government, Francis found time to publish a series of satirical pamphlets and essays, commenting and criticizing English rule in order to stir up support for the American movement towards independence. He was also a talented and prolific musician and composer, credited as the first American composer to commit a composition to paper. He was happily recruited as the organist at Philadelphia’s Christ Church.

Perhaps Francis Hopkinson’s most noted achievement came in the infancy of the United States. Based on a large amount of documentation and numerous examples of corroboration, Francis was informally selected by the Second Continental Congress to design a flag to represent the country. Using elements from previous designs for the U.S. Navy, Francis presented a flag with 7 white stripes alternating with 6 red stripes and blue field filled with thirteen six-pointed stars. The flag was officially adopted by the country on June 14, 1777 with a huge celebration. However, three years after the celebration passed, Francis found himself with no compensation — or even acknowledgment — for his efforts. He composed a letter to Congress in a decidedly “tongue-in-cheek” tone. In his letter, Francis specifically requested “a quarter cask of wine in payment for designing the U.S. flag, the Great Seal of the United States [which he also designed], and various other contributions.” His initial request was ignored, prompting a second letter. This one was more to the point and far less jovial. He asked outright for  £2,700 — cash. A report from the commissioner of the Chamber of Accounts said that the bill was reasonable, but Congress, once again, balked and stalled. They asked for an itemized list of services and when it was provided, they stalled again. Francis was fuming. Congress then determined that since Francis Hopkinson was already a public servant when his design for the flag was submitted, he was already compensated for all services that he provided and therefore not entitled to any further remuneration of any form. Essentially, he was screwed.

Francis Hopkinson suffered from a sudden apoplectic seizure and died at the age of 53, just a few years into his appointment as a federal judge. He is buried in Christ Church Cemetery in Philadelphia, along with six other signers of the Declaration of Independence.

In 1876, as the United States was gearing up for its Centennial celebration, one William Canby, grandson of a Philadelphia upholsterer named Betsy Ross, invented a story about his ancestor designing and sewing the first U. S. flag for Continental Army General George Washington. The story was supposed to show an example of women’s contributions towards the goal of American independence. The familiar flag — the one with a circle of stars in the blue field — didn’t come into use until after the end of the Civil War. William Canby’s story was just a good piece of marketing.

Unfortunately, while the story of Betsy Ross hogs the spotlight, true female heroes of the American Revolution — like Nancy Hart, Sybil Ludington, Deborah Sampson, Mary MacCauley (better know as “Molly Pitcher”), Margaret Corbin and many others — have yet to get their rightful recognition.