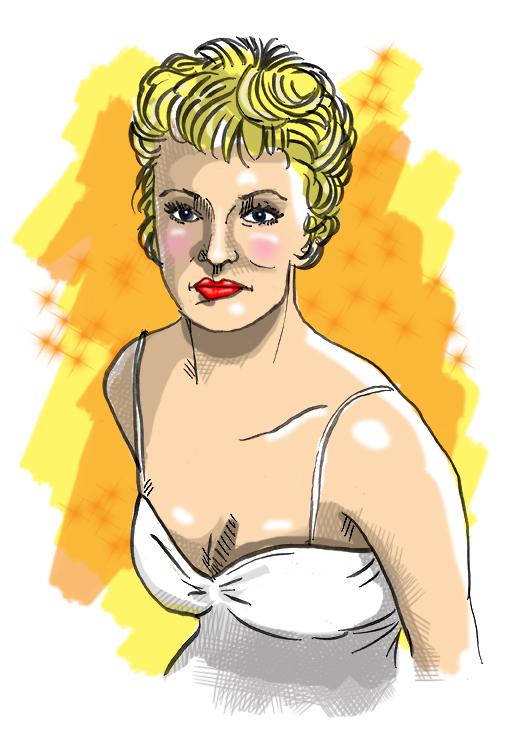 Fay Spain was on her own at 14, living in the attic at the home of her English teacher. At 17, she lied about her age and got a job as a dealer at a Reno, Nevada casino. She proudly proclaimed she made more money than her husband who worked as a gambling shill at the same casino.

Through a mutual friend, she became acquainted with noted columnist Walter Winchell, who mentioned Fay’s name in a column. A casting agent from Columbia Pictures called Fay in for a screen test. She was not offered a contract, though. She was told that she wasn’t “pretty enough” for Hollywood. Another failed screen test — this one with up-and-coming actor James Garner — resulted in Fay being told that she was not photogenic enough for the big screen.

Fay was undeterred. In 1955, she was named one of 15 young ladies to represent the Western Association of Motion Picture Advertisers on a promotional tour. This led to a role in The Crooked Circle, a boxing picture in 1957 and later to a part in the big screen adaptation of Erskine Caldwell’s God’s Little Acre, co-starring Robert Ryan and Tina Louise in her motion picture debut. Fay proved Hollywood wrong by starring in dozens of films and television programs through the 50s, 60s and 70s. She even appeared as a contestant on You Bet Your Life with Groucho Marx. Fay’s final film role was in The Godfather Part II, potraying the  wife of mobster Hyman Roth (as played by Lee Strasberg).