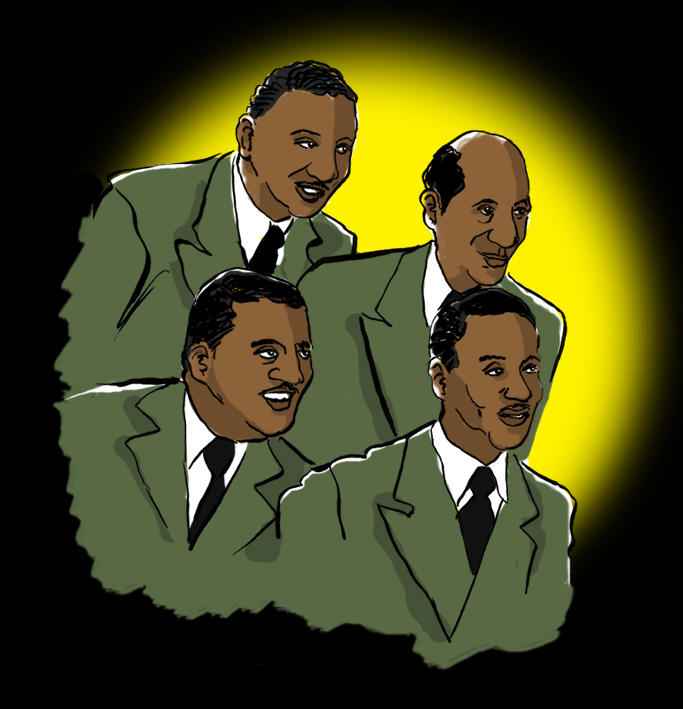 The Mills Brothers began singing in their church choir, branching out to street performances outside their father’s barbershop. A win on a local talent show got them a gig at May’s Opera House in their hometown of Piqua, Ohio. They sang in between showings of Rin Tin Tin. Famed pianist and bandleader Duke Ellington saw the group while on tour in nearby Cincinnati. He was so impressed, he called a representative at Okeh Records and signed the young quartet to a recording contract. They were brought to New York where stardom awaited.

In 1930, CBS Radio exec William Paley was urged to listen to the young men rehearse. He was elated and immediately signed the band to a three-year contract, making them the first African-Americans to have a network radio show. Each program began with the announcement that the only musical instrument or mechanical devices used was a single guitar. The Mills Brothers were adept at imitating trumpets, saxophones and trombones. A similar statement was printed on their record labels. They enjoyed wild success for decades with chart-topping records, radio and film performances and lucrative sponsorships.

In the 1950s, trying to combat the popularity of rock and roll, the Mills Brothers recorded a reworking of a song called “Das Glühwürmchen”from a 1902 German operetta called Lysistrata. American lyricist Johnny Mercer penned new lyrics and re-titled the tune “Glow Worm.” The song, released by the Mills Brothers in 1952, was their last Number 1 hit.