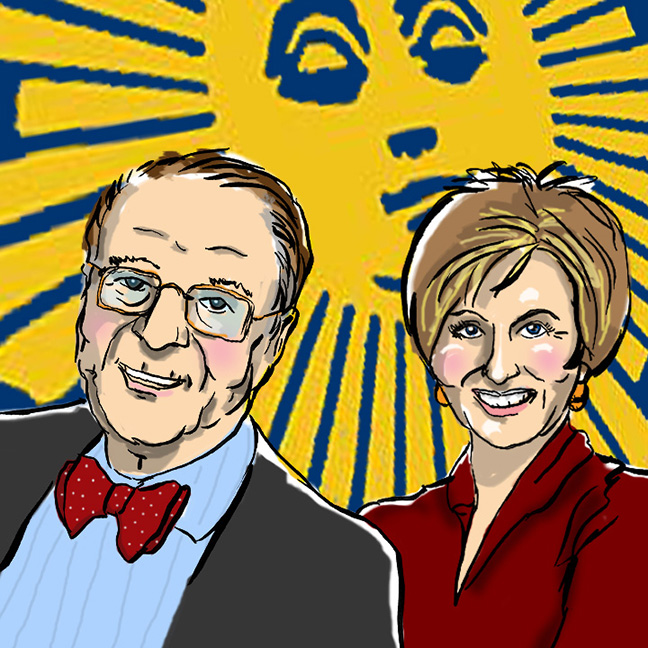 I started watching CBS Sunday Morning years ago, when Charles Kuralt was the host. The show, conceived as the television equivalent to the Sunday newspaper magazine, set an easy pace with gentle stories that were the perfect accompaniment to a bagel and a cup of coffee. Kuralt, the veteran newsman, delivered the introduction to each segment in a friendly manner as he stood on the sparse studio stage, graced only by a chair and the subtly smiling sun icon. His calm demeanor was so beloved that, after his retirement in 1994, fans were shocked by scandalous tales of the avuncular Kuralt’s double life as a philandering playboy with two separate, but simultaneous, families.

Kuralt’s successor was Charles Osgood, the smiling, genial news correspondent known for his daily broadcasts on the CBS Radio Network. Osgood brought a dignified “homey” air to the program, all while looking dapper in his neatly-tied trademark bowtie. For twenty-two years, the grandfatherly Osgood presided over a wide variety of stories presented in a heartwarming and soothing style. Preceding different holidays, he offered bits of self-penned whimsical poetry and even sang while accompanying himself on the grand piano. He was reminiscent of an old friend or family member who was always welcome in your home.

This past October, Osgood stepped down as host of CBS Sunday Morning, relinquishing his post to Jane Pauley. Pauley made appearances on CBS Sunday Morning in a correspondent capacity over the past few years, contributing feature stories and sometimes even serving as substitute host. Since Jane Pauley took over, I find myself losing interest in the show. I can’t quite put my finger on what exactly it is, but something is different. The individual segments are still compelling, the editorials are insightful and humorous when they need to be, but there’s just something off about the whole complexion of the show. It doesn’t seem as warm or inviting. It seems to have lost that nostalgic, fireside “homey” feeling, its unique personality, its throwback to days-gone-by. It has morphed into just another product of the CBS News department.

I will continue to watch… until something better comes along. Or until I lose interest completely.