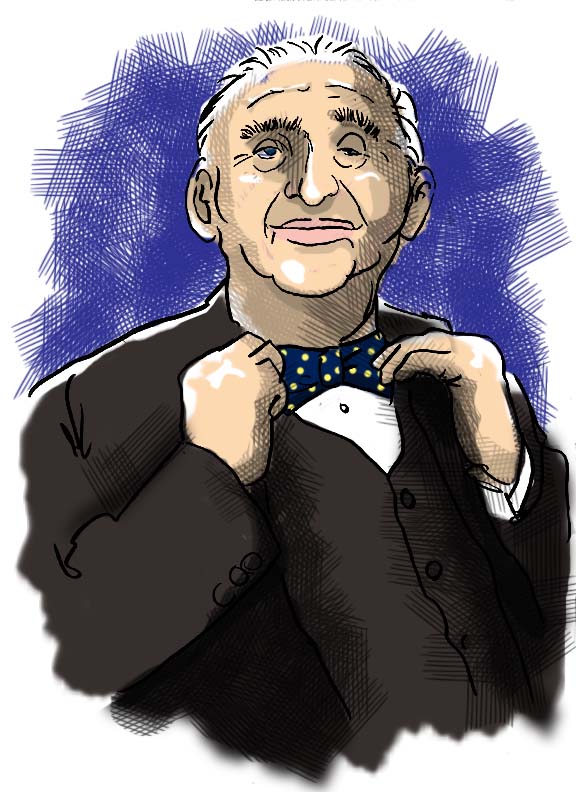 Philip Finkel was born in in Brooklyn in 1922. Using the Yiddish name “Fyvush” he made his stage debut at nine-years-old in New York’s thriving Yiddish theater. He performed all types of roles, including stand-up comedy.

In 1964, he made his Broadway debut in Fiddler on the Roof. He stayed with the show for many performances, playing several roles along the way. He eventually took the lead of “Tevye” in a national touring company. Later, he took over the role of ” Mr. Mushnik” in Little Shop of Horrors. He continued to work with the Jewish theater while simultaneously taking roles on TV dramas and comedies. In 1992, he was cast as public defender Douglas Wambaugh in the television series Picket Fences. He won an Emmy for the role, saying at the televised ceremony, “I’ve waited 51 years for this moment.” Producer David E. Kelley cast him again in Boston Public as crotchety history teacher “Harvey Lipschultz.” Fyvush even found time to lend his voice to episodes of The Simpsons and Aaahh!!! Real Monsters. He appeared in a number of theatrical films including Nixon, Brighton Beach Memoirs and A Serious Man.

After a long and celebrated career, including a stage production chronicling that career,  Fyvush Finkel passed away at 93.