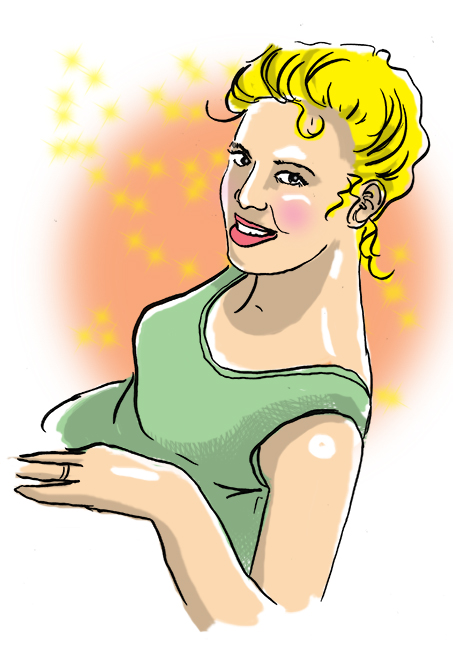 Betsy Palmer had a long and illustrious career in films, television and on the stage. She was featured in the original teleplay of Paddy Chayefsky’s Marty in 1953, two years before its big screen adaptation. She originated the role of “Alma” in Tennessee Williams’ The Eccentricities of a Nightingale. She was Williams’ personal choice for the role. In films, she starred opposite Tyrone Power and Anthony Perkins. She was well known to television audiences as a panelist on the popular game show I’ve Got a Secret. She is best remembered, however, for a movie role she took only to earn enough money to replace her out-of-commission car. She was offered the part of “Pamela Voorhees,” mother of the iconic killer Jason, in the 1980 slasher film Friday the 13th. She hated the script, saying it was “a piece of shit,” and predicting “Nobody is gonna see this!”  Reluctantly, she took the part. Although the low-budget film did surprisingly well, she distanced herself from it for a long time. Years later, she ultimately embraced the film and regularly appeared at horror conventions to meet fans. She made a cameo appearance in Friday the 13th‘s first sequel, but declined all subsequent sequels.

I met Betsy eleven years ago at one such convention. As a long-time collector of autographed photos, I was anxious to meet Betsy Palmer. She was gracious and charming when she greeted my son and me. I perused the selection of photos displayed on her table and was disappointed when I didn’t see any shots representative of my favorite role of Betsy’s from one of my all-time favorite movies.

I sheepishly asked Betsy, “Nothing from Mister Roberts?” (Mister Roberts was the filmed version of the hit stage show about navy life during World War II featuring an all-star cast including Henry Fonda, Jack Lemmon [in a role for which he won his first Oscar], William Powell [in his final role] and James Cagney.)

Betsy smiled, then laughed. She put her arm around my shoulders, gestured to the crowd — a mix of costumed freaks, leather-clad goths and greasy fanboys — and whispered to me, “Do you think any of these people have seen Mister Roberts?”

Betsy passed away in 2015 at the age of 88. Despite a successful career that spanned six decades, she was left out of the “In Memoriam” segment at the 88th Academy Awards ceremony the following February.