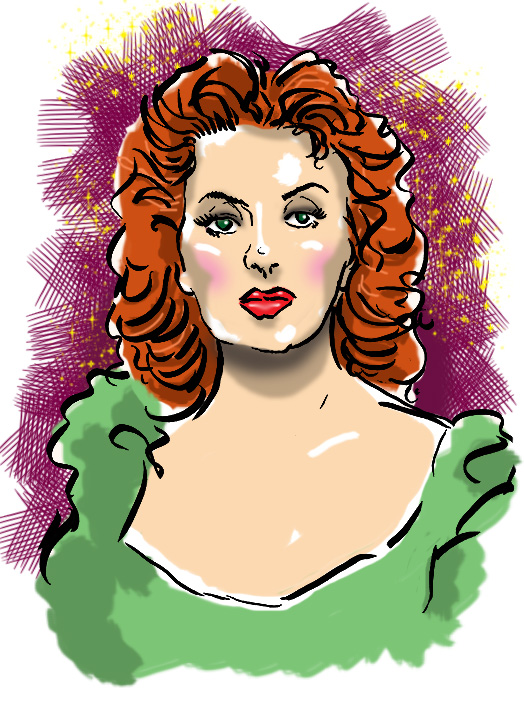 Maureen O’Hara was a true movie star. From her debut in 1938 until the early 1970s, she made over fifty films. She starred opposite such big names as Charles Laughton, Tyrone Power and, of course, John Wayne. Maureen and Wayne appeared in five films and became lifelong friends. Wayne once remarked, “She’s a great guy. I’ve had many friends, and I prefer the company of men. Except for Maureen O’Hara.”  The feeling was mutual as Maureen sank into a deep depression after Wayne’s death in 1979.

Maureen was feisty, outspoken and stood by her convictions. Her relationship with commanding director John Ford was definitely of the “love-hate” variety. Although he praised her work, Ford never offered that praise to her face. As a matter of fact, he often berated her. During a scene when Maureen was sitting in a speeding cart, the wind kept blowing her hair across her face. Ford hollered “Open your damn eyes!,” to which Maureen replied, “What would a baldheaded son of a bitch like you know about hair lashing across his eyeballs!” However. Maureen always suspected that Ford was secretly in love with her.

In the 1940s, Maureen earned the nickname “The Queen of Technicolor.” With her fiery red hair, creamy complexion and piercing green eyes, she was the best advertisement for the film process. Technicolor’s developers agreed. Technicolor, it seemed, was actually detrimental to Maureen’s career, as she was viewed as just a beauty and not taken seriously as a talented actress.

In the 1960s, Maureen tried to steer away from the Westerns and adventure films with which she had become so associated, although she starred in director Sam Peckinpah’s debut The Deadly Companions. She played against type in a role as a weak and vulnerable woman. The film was panned and Maureen said Peckinpah was “one of the strangest and most objectionable people I had ever worked with.” Soon after, she appeared in Walt Disney’s The Parent Trap. Although the film was a hit and critically acclaimed, Maureen was involved in a contract dispute and never worked for Disney again. As the 60s came to an end and the 70s began, Maureen grew to dislike the current Hollywood trends, commenting on “making dirty pictures” of which she wanted no parts.

She was coaxed out of her 20-year retirement by a script from writer-director Chris Columbus. The film was Only the Lonely and she was instantly enchanted by her co-star John Candy. She said Candy reminded her of Charles Laughton. Maureen went on to make a few television movies and then retired a second time. This time for good.

After suffering a stroke, followed by a diaginosis of short-term memory loss, family members made claims that 92-year old Maureen was a victim of elder abuse at the hands of visiting social workers. For protection, she moved to her grandson’s farm in Idaho where she lived out her remaining years.