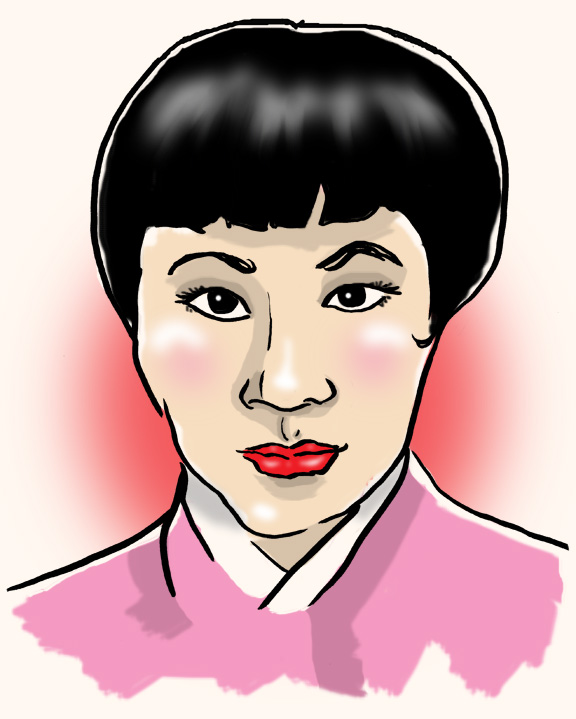 Born in Japan in 1929, Umeki Miyoshi was the youngest of nine children of the owner of an iron factory. In her 20s, using the stage name “Nancy Umeki,” she recorded a succession of American jazz standards for the RCA Victor Japan label and performed a popular nightclub act. A talent scout saw her act and convinced her to move to New York.

Now using the name Miyoshi Umeki (Japanese tradition has the family name preceding the given name. She reversed her name to the more American form.), she was booked on the Arthur Godfrey Talent Scouts show and became a series regular for a short time. Her enchanting combination of American pop styling and traditional Kabuki theater caught the eye of director Joshua Logan. Miyoshi was cast in Logan’s big screen version of Sayonara, based on the on the novel by James Michener. Her moving performance earned her an Academy Award for Best Supporting Actress in 1958 (as well as the Best Supporting Actor Oscar for her co-star Red Buttons). She was next cast in the Broadway production of Rodgers & Hammerstein’s Flower Drum Song, and eventually, the film version. She sang the memorable “A Hundred Million Miracles” and was serenaded by Jack Soo, the future Detective Yemana on TV’s Barney Miller, in the song “Don’t Marry Me.”

Throughout the 1960s, Miyoshi regularly appeared on episodic television, like The Donna Reed Show and Mr. Ed. In 1971, she took on the role for which she is most remembered – the gentle housekeeper “Mrs. Livingston” on The Courtship of Eddie’s Father. After three seasons, the series was canceled and Miyoshi left show business for good. She stayed completely out of public life for 35 years, her name only surfacing when her obituary appeared in newspapers across the country in 2007. While living with her son and grandchildren in Missouri, she succumbed to cancer. Miyoshi was 78 years old.