I haven’t been posting illustrations to this blog as often as I’d like. So, in 2016, I will post at least one illustration per week (maybe more) on the subject for which I’ve gained a reputation — dead celebrities.

The first one is actor Edward G. Robinson. 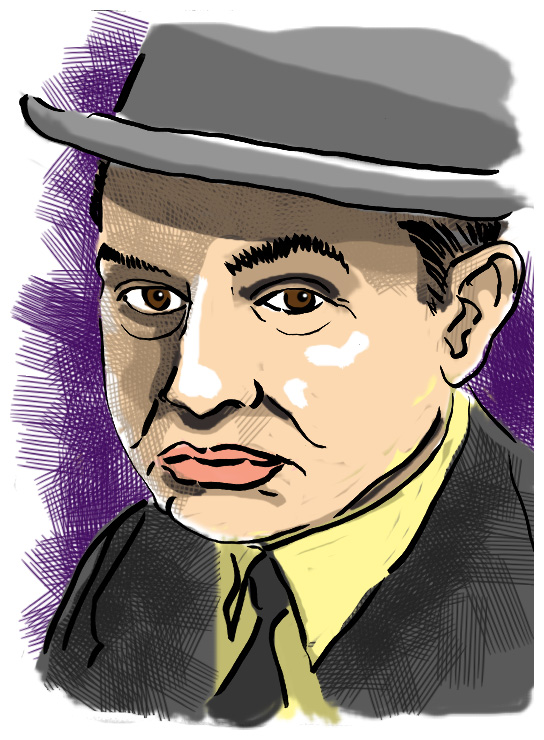 Ten-year-old Emmanuel Goldenberg emigrated with his family from Romania, after experiencing constant antisemitism. The family settled in Manhattan’s Lower East Side and soon, Emmanuel (now calling himself Edward) entered the popular Yiddish theater. At 23, he made his Broadway debut which led to a lucrative and very productive film career.

In films, he was typecast as crass, ruthless and vile gangsters. It was a direct contrast to his actual demeanor. Edward was a sweet, gentle and  compassionate man. He was an outspoken combatant to Nazism. He contributed thousands of dollars to many political groups throughout the years during World War II. He called for a boycott of German-made products. He portrayed several prominent Jewish public figures, including Dr.Ehrlich, pioneer in blood disease research, and Paul Reuter, a forerunner in news reporting. He was a man of culture with a love for classical music and a collector of fine art. Edward partnered in an art gallery with fellow art lover Vincent Price.

In the 1950s, he was called to testify in front of the House Un-American Activities Committee. He worked hard to clear his name, although he refused to name any Communist sympathizers. His testimony damaged his career and, although not blacklisted, he found it difficult to be cast in anything larger than minor and supporting roles. His friend, and noted anti-Communist, Cecil B. DeMille cast him as the nefarious Dathan in The Ten Commandments. It was the jump-start that his sagging career needed. Edward was soon back in demand, taking roles in both television and movies.

In 1973, he was cast as Charlton Heston’s friend and roommate in the science-fiction classic Soylent Green. Edward was suffering from the effects of cancer during production and had gone completely deaf. He regularly had to perform several takes of scenes until he got the rhythm of his fellow actors delivering their lines, as he could not hear them. Sometimes, he would continue to deliver his own lines after the director had hollered “Cut!” He had only told co-star Heston of his illness, prompting Heston to cry real tears during Edward’s climactic “suicide” scene. Edward passed way ten days after the film wrapped. He received an honorary, though posthumous, Oscar later that year. He was never nominated for the award during his 50-plus year career.

In the 2015 film, Trumbo, Edward (as portrayed by actor Michael Stuhlbarg), is wrongly shown as the betrayer of Dalton Trumbo and others during hearings before the House Un-American Activities Committee. This is not historically accurate. Edward even wrote an article for American Legion Magazine called “How the Reds made a Sucker Out of Me,” explaining how he was duped by communist organizations.