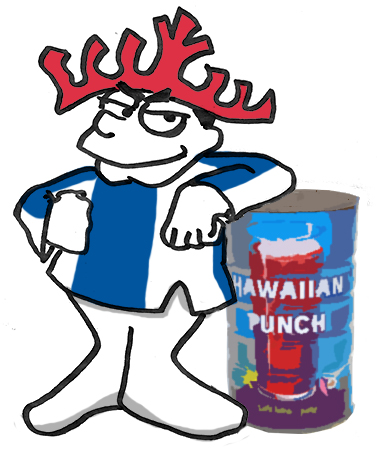 In 1934, huddled away in a converted garage in Fullerton, California, ice cream topping entrepreneurs A.W. Leo, Tom Yates and Ralph Harrison mixed and blended and experimented with a variety of fruit flavors. They finally hit upon the perfect combination of seven fruits: apple, apricot, guava, orange, papaya, passion fruit, and pineapple. They sold the product to area restaurants and soda fountains under the name “Leo’s Hawaiian Punch,” dropping Leo’s name a short time later. However, customers discovered that the thick concentrate was pretty tasty as a drink when mixed with water. A businessman named Reuben Hughes purchased the trio’s company and began to distribute quart bottles of the concentrate through his new company Pacific Hawaiian Products. By 1950, ready-to-serve cans of Hawaiian Punch hit grocery store shelves.

In 1962, ad agency Atherton-Privett created a short television commercial featuring a smarmy little character to hawk the fruity drink. Clad in a blue & white striped shirt and a wild interpretation of a straw hat with a voice provided by actor Ross Martin, “Punchy” offered an oafish tourist (appropriately named “Oaf”) the question “Hey! How ’bout a nice Hawaiian Punch?” When the unsuspecting fellow would answer in the affirmative, Punchy would haul off and knock the poor guy on his ass. Then, Punchy would turn to the camera and, in a moment of self-awareness, smile and say, “Wasn’t that a nice commercial?” During an airing of the spot on The Tonight Show, host Jack Paar was so taken, he insisted the commercial be run again, announcing “The second time is free.”

The company changed hands over the years with ownership passed from R.J. Reynolds to Proctor and Gamble to Del Monte to Nabisco to Cadbury Schweppes to its current owner Dr. Pepper. Punchy, however, has been redesigned and taken a smaller role in the product’s promotion.