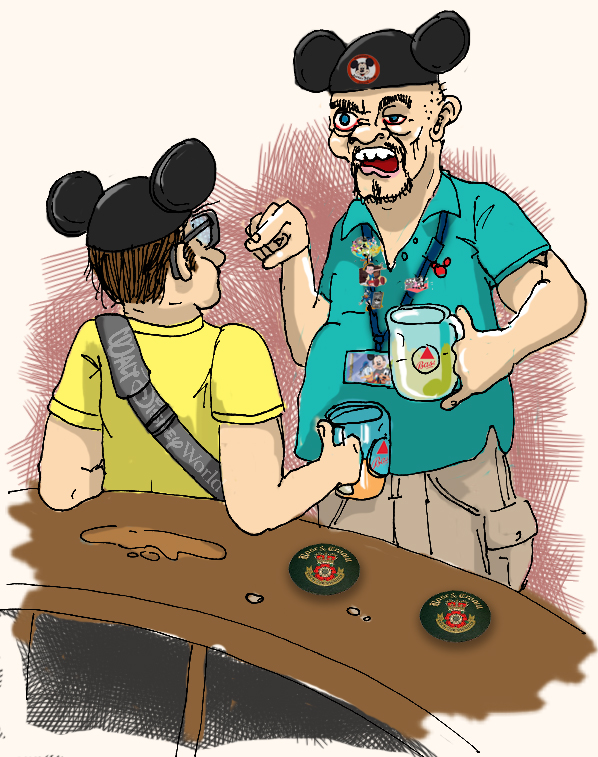 I’ll be honest with you. I took my second trip to Walt Disney World in 1981 because I was so drunk during my first trip the previous year, I wasn’t able to remember a whole lot.

I wasn’t violent or destructive or even mischievous. I was just plain, old-fashioned inebriated, and thus, a temporary amnesiac. Yeah, I know. Drunk in Walt Disney World? How awful! Not to justify my actions, but I was nineteen. I was on my first vacation without my parents. And, most importantly, I was of legal drinking age in Florida.  But, I must stress, I was not belligerent nor aggressive nor did I impede on anyone’s good time.

In 2009, my family took a trip to Walt Disney World. We did all the things we had done on previous trips regardless of the fact that my son was now 22. We all approached the experience with the strange combination of the wonderment of children and the cynicism of… well… Pincuses. One evening, we dined in one of our favorite restaurants – The Rose and Crown, located on the banks of the great World Showcase Lagoon in EPCOT’s United Kingdom Pavilion. Having no real frame of reference, I imagine that the eatery is a “Disney-fied” recreation of a sanitized version of a British pub. Our waitress, Linda, like most cast members (Disney’s corporate euphemism for “employee”), was friendly, talkative, attentive and overall delightful. In between dinner courses, she told tales of living in her native England* and about working at Walt Disney World. As she cleared away our main course dishes — and confirmed that it would be okay to linger and watch the nightly “IllumiNations” fireworks spectacular from our prime vantage point — she told us that she rarely waits tables in the dining room. Her usual assignment is tending the bar at the pub in the front portion of the building. We laughed and imagined that she probably has seen her share of interesting behavior. She suddenly pulled up a chair and leaned in close to relate one such incident. She smiled and explained that, while most guests are happy and cheerful, some get a little hostile after a few beers — no matter where they are. One recent night, as closing time approached, two gentlemen were knocking back more than their fair share of Bass Ales while their families where wandering about elsewhere. Something triggered a disagreement between the two. Soon, it elevated to a heated argument that evolved into several unwelcome shoves. Linda quickly set down the glasses that she was wiping down to practically leap over the polished wood bar and place herself in harm’s way as a buffer between these vacationing combatants.

“Hey!,” she shouted, extending her small arms in an effort to keep these lunkheads out of each others reach before they came to blows. “Let’s not forget where we are!,” she loudly reminded them,”We’re in Disney World! The happiest place on Earth!” Another cast member summoned a couple of burly security officers and the rambunctious pair were led off… in different directions. Linda confessed that episodes like that happen more often than you’d expect. Way more often.

More recently, as a matter of fact, Space Mountain and The Haunted Mansion weren’t exciting enough for one Andrew Hall. His May 2015 vacation called for a little more adventure than Disney could offer, as related in this story from The Orlando Sentinel.

My family is once again planning a Disney vacation. We will try to behave ourselves.

*When EPCOT first opened its gates in 1982, they made a conscious effort to employ natives of the respective countries represented in World Showcase in order to maintain the “you are actually in this country” illusion of which Disney is the pioneer and master.