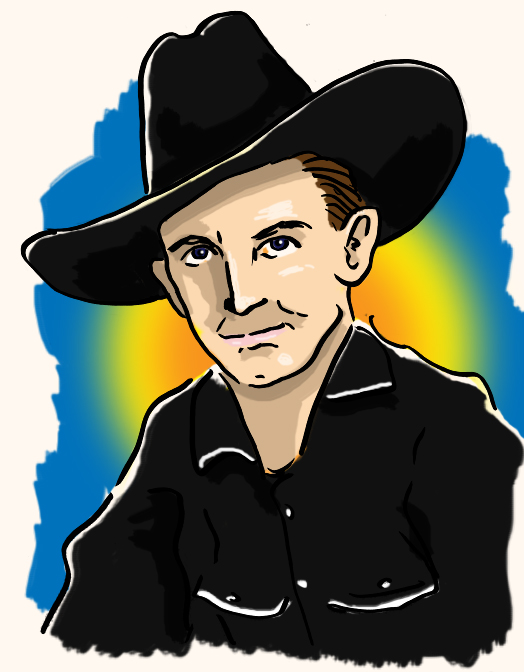 For over twenty years, Stuart Hamblen, the son of a Methodist minister, had a popular radio show on the West Coast. He also appeared in Western movies alongside Roy Rogers, Gene Autry and John Wayne, composing the music for the films as well. His onscreen personality caught the attention of British record label Decca and, in 1934, he was signed as the first artist to their American subsidiary.

As his popularity increased, so did his alcohol consumption. He was regularly arrested for fighting and destructive behavior and was just as regularly bailed out of jail by his show’s sponsors. He further spiraled when he began gambling on horses. But, in 1949, Stuart attended the very first coast-to-coast television broadcast of a religious crusade by an up-and-coming evangelist named Billy Graham. Stuart reached an epiphany that night and, on live television, told Reverend Graham that he would devote his life to Christ. Graham shot to international notoriety and Stuart was fired from his show for refusing to do beer commercials.

Soon, Stuart started a new radio program titled The Cowboy Church of the Air. He began writing and recording songs and regained his fame with a new audience. He wrote songs with inspirational messages like “This Ole House,” (a hit for Rosemary Clooney), “Texas Plains,” (reworked into “I Want to Be a Cowboy’s Sweetheart,” a million-seller for Patsy Montana) and the John Wayne-inspired “It Is No Secret (What God Can Do).” His most familiar composition became a hit over ten years after it was written. Although Stuart recorded the original version (released under the name “Cowboy Church Sunday School “) and The McGuire Sisters recorded it a short time later, The song “Open Up Your Heart (And Let The Sun Shine In)” was immortalized by cartoon characters Pebbles Flintstone and Bamm-Bamm Rubble in a 1965 episode of the classic Flintstones called “No Biz Like Show Biz”. The song was so popular, it was used over the closing credits of The Flintstones in its final season.

Stuart used his celebrity to claim a spot in the 1952 presidential race. A staunch supporter of the American temperance movement,  Stuart ran on the small Prohibition Party and garnered 72,949 votes. Dwight Eisenhower won the election with 34 million votes.

Stuart was recognized by the recording industry with inductions into the Nashville Songwriter Hall of Fame and the Texas Cowboy Hall of Fame. He was awarded the Gene Autry Golden Boot and even received a star on the Hollywood Walk of Fame.

In 1989, 80-year-old Stuart Hamblen passed away from brain cancer. Billy Graham delivered the eulogy at the funeral.