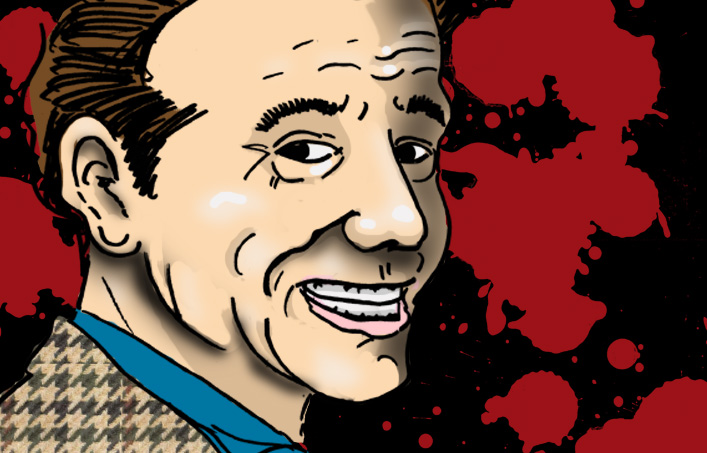 As a recent graduate of California State University, Northridge, Phil Hartman took his graphic arts degree and started a design business. He specialized in album covers and created designs for Poco, America and Crosby, Stills, Nash & Young. Then, he gave it up for a shot at comedy.

He joined the improvisational group The Groundlings alongside another comic named Paul Reubens. Phil and Paul created a character called “Pee Wee Herman”. Paul became the embodiment of the character, while the pair collaborated on sketches, a stage show, an HBO special and eventually a screenplay.

Phil began doing cartoon voices and appearing in small roles in movies until his successful audition for Saturday Night Live in 1986 made him a household name.  He was the show’s chameleon, able to don a wig and costume and become any one of a number of characters. The same year as his SNL debut, the twice-divorced Phil went on a blind date with aspiring actress Brynn Omdahl. They were married a year later.

Phil’s marriage to Brynn was volatile, mainly due to Brynn’s excessive drug use. Although she was a devoted mother to their two children, Brynn was frustrated by and jealous of Phil’s success. The couple fought regularly and Phil often sought isolation from his spouse when the arguing headed out of control.

On May 28, 1998, Brynn was drinking with a friend at a Buca Di Beppo restaurant near their Encino home. She headed home and, after entering the house, began a heated argument with Phil.  Tempers flared and tensions heightened as Phil threatened divorce if Brynn started using drugs again. He stormed off to bed. At 3 in the morning, Brynn entered their bedroom with a .38 caliber handgun and fired three shots into her husband while he slept.

She fled to a friend’s house and confessed her actions, although her friend did not believe her at first. She convinced him to drive back to the scene and when they did, he discovered Phil’s bloody and lifeless body. He called the police. Within minutes the police were escorting the hysterical Hartman children from the family home. Brynn had locked herself in the couple’s bedroom. Just as police were about to break down the door, Brynn stuck the barrel of a handgun in her mouth and pulled the trigger.

Phil was a few months shy of his 50th birthday. Phil’s children will inherit the comedian’s $1.23 million dollar estate, as well as an out-of-court settlement from a wrongful death law suit against Pfizer that blamed Phil’s death on Brynn’s abuse of the antidepressant Zoloft.