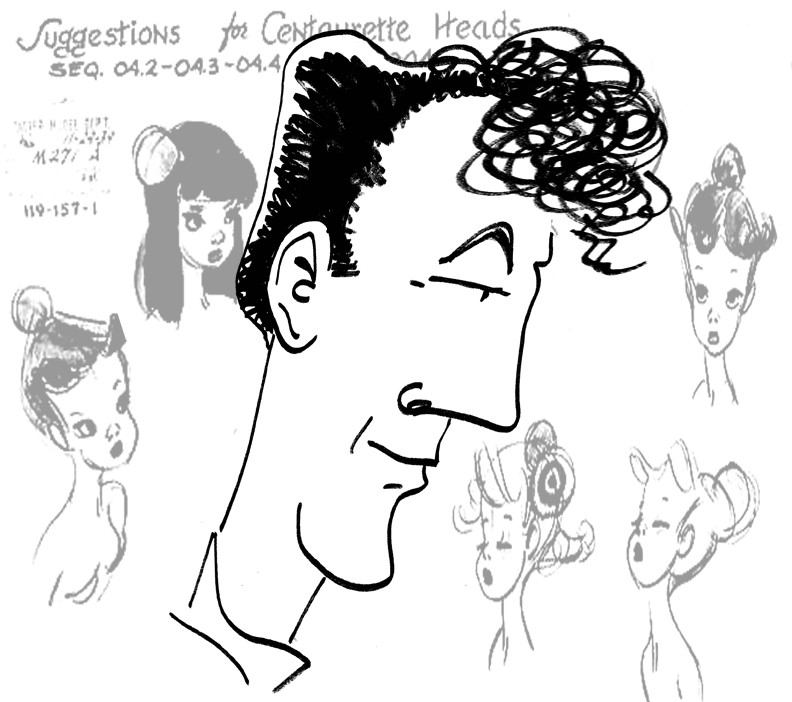 As soon as Fred Moore joined the Disney Studios, he began to build his legacy. The self-taught artist worked as an animator of several cartoons, including Three Little Pigs and its sort-of sequel Three Little Wolves.  In 1937, he was the supervising animator on Walt Disney visionary classic Snow White and the Seven Dwarfs.  It was under Fred’s direction that the individual personalities of the Dwarfs emerged. On Snow White’s success, Fred was given the task of chief animator of the lovably nasty Lampwick in Pinocchio.

In 1940, Fred tackled the redesign of Disney’s iconic Mickey Mouse for “The Sorcerer’s Apprentice” sequence in Fantasia.  Fred’s design is the one with we are most familiar and is the style of Mickey we know today. Fred followed that with work on Dumbo, The Three Caballeros, Saludos Amigos, Make Mine Music and several animated short subjects. It was around this time that he developed what came to be known as “The Freddie Moore Girl” in animation circles. Fred had created a character design of an innocently sexy young girl that became the basis for the centaurettes in Fantasia,  the teenagers in “All the Cats Join In” segment of Make Mine Music,  Katrina in The Legend of Sleepy Hollow and the mermaids in Peter Pan.  (In the late 1980s, when production began on The Little Mermaid, instructions were distributed among animators noting the differences between the established characters and the “Freddie Moore girls” – just so no one would get any ideas.)

In 1946, Fred left Disney to join animator Walter Lantz. While at Lantz’s studio, he redesigned the classic character Woody Woodpecker to the version still popular today. Fred returned to Disney Studios in 1948 and worked on Cinderella, Alice in Wonderland  and Peter Pan.

In November 1952,  Fred was taking a break from the grueling animation project of Peter Pan.  He and his second wife Virginia (coincidentally, his first marriage was to a woman also named Virginia) were watching a football game at the home of fellow Disney artist Jack Kinney. After the game, the Moores got into their car to head home. With Virginia behind the wheel, she maneuvered the car into a U-turn on rural Big Tujunga Canyon Road, just north of Glendale. Their vehicle was struck head on. Fred died the next day in the hospital of cerebral hemorrhage resulting from a concussion sustained in the accident. He was 41 years-old. Sadly, rumors of drunk driving circulated for years despite many printed obituaries stating the facts.