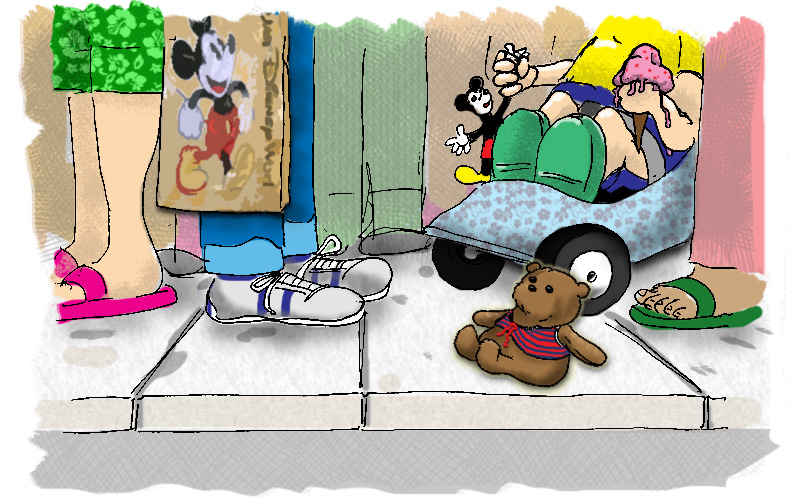 Let me tell you about Pudge.

In the summer of 1982, just after Mrs. Pincus and I met, we went on a day trip to Hershey Park. Just barely into our 20s, the appeal of an amusement park still held excitement for us. In between turns on the roller coasters, bumper cars and Mrs. P’s personal favorite, the Tilt-O-Whirl, we wandered into a few souvenir shops that dotted the park’s layout. Among the Hershey-emblazoned t-shirts, snow globes, mugs and giant pencils was a shelf displaying an array of plush animal characters. On the second shelf below eye-level sat a slightly over-stuffed brown bear looking very dapper in a blue and red striped shirt. That bear was Pudge. The expression on Pudge’s face made him look a bit forlorn and Mrs. Pincus was instantly smitten. I convinced Mrs. P that the last thing she needed was another stuffed animal. (At the time, I did not realize the gravity of the mistake I was in the process of making.) Pudge was placed back on the shelf and we left the store. The one-sided conversation on our ride home was me being berated for not allowing the purchase of Pudge. The next several months saw my beloved bride scouring every conceivable outlet within a fifty-mile radius that would have the remotest of possibilities of stocking the elusive Pudge. (This was in a time before a simple Google search would yield any number of global retail establishments and purchases could be made without putting on shoes, getting dressed, burning gasoline or contact with another human being.) Finally, after what seemed like an eternal exercise in futility, Pudge was tracked down and located at a mall a little under sixteen miles from our home. Mrs. Pincus purchased that little brown fellow, brought him home and soon his adventures began.

Pudge has accompanied my family on many trips to many places. From short jaunts around the corner to my in-law’s house to exciting, multi-day automobile treks down the eastern seaboard to elaborate, cross-country flights to the Pacific coast, Pudge has been there and he has the pictures to prove it.

L to R (top row): At the Statue of Liberty; On the Kiss production line at Hershey, PA; With the Monster.com mascot at eBay Live in Boston; Pudge receives the Emmy; In Graceland’s visitor parking lot; At the Haunted Mansion in Disneyland; With the 2008 World Series trophy.
L to R (bottom row): At the famous Randy’s Donuts in Inglewood, CA; On the front steps of Gianni Versace’s house in Miami; On Winnie the Pooh’s star on the Hollywood Walk of Fame; Waiting for the Strasburg Rail Road; Having fun on a Carnival cruise; Riding a Nittany Lion at State College, PA; Riding the bus with Rosa Parks at the National Civil Rights Museum in Memphis.

Pudge has seen the roaring waters of Niagara Falls and the stirring majesty of The Statue of Liberty. He has paid his respects to the late King of Rock and Roll at Graceland and viewed memorabilia of Elvis’ contemporaries at The Rock and Roll Hall of Fame in Cleveland. Pudge has witnessed tributes to legendary ballplayers at the Baseball Hall of Fame in Cooperstown and the star-studded Walk of Fame in Hollywood. One trip, however, is the topic of limited discussion — the details of which are related in hushed tones and then quickly the subject is changed before emotions bubble over. Over twenty-five years after Pudge joined our family, he was nearly lost forever. (Sure, one time my wife absent-mindedly stuck Pudge in a drawer at her parent’s seashore apartment in Ventnor, New Jersey. But, once we retraced our moves, Mrs. P was again united with Pudge in a tearful reunion.)

As spring became summer in 2008, the planning stages began for a complicated, multi-legged, two-week drive to Florida — involving my in-laws, my brother-in-law and his family and other assorted and uncategorized extended family members — with a lengthy stop in Orlando before proceeding to the ultimate destination of Miami Beach to visit yet more relatives. My wife would be accompanying her parents alone, serving as travelling companion, as well as navigator and chauffeur of their vehicle for the lion’s share of the journey. I would not be joining them, as securing two consecutive weeks off from my full-time job would be difficult, plus, it was implied that my son and I were not invited on this trip. (I surmised this when my wife’s brother informed her rather bluntly, “Your miserable husband and your miserable son are not invited.” I was quite proud of my brilliant deduction skills.) My wife carefully packed all the necessities she would require for a fortnight in the Sunshine State including a travelling companion of her own — Pudge. Snug within the confines of her backpack, Pudge stayed secure between Mrs. P’s make-up bag and her wallet, occasionally popping out for a seat on the dashboard, providing company when Mrs. P’s Mom and Dad dozed off in their seats.

I kept in regular phone contact with my wife during her trip. She’d call to document the day’s activities, the sights they saw, the pictures Pudge posed for. I’d tell her about the concerts my son and I attended in her absence and reassured her that we were eating well and taking care of each other. As she began her week in Orlando, the phone conversations evolved into reports of the petty arguments and unusual behavior she witnessed among her family as an unattached observer. Mrs. Pincus was the first one up each morning and, subsequently, the first one out the door as my sister-in-law’s sister staggered about in a hangover-induced stupor and my two nieces bickered over which pair of Crocs they would wear and who picked all the green clovers out of the box of Lucky Charms. With a smile on her lips and Pudge in her backpack, Mrs. Pincus exited the mayhem in the claustrophobic time-share and drove her own rental car off to enjoy a Disney theme park. She’d spend several days experiencing all that Disney offered in EPCOT, the Disney Studios and, of course, The Magic Kingdom. (She skipped the Animal Kingdom because, no matter how persuasive Disney tries to be with the idea that it’s “Natazu” … it’s a zoo.) Her solo adventures were interrupted infrequently by the briefest interaction with her parents (based on their limited capacity of mobility) or her brother’s family (based on their limited capacity of getting their shit together). So, for the most part she was alone — except for Pudge.

On the final day before departure to their more southerly course, Mrs. Pincus wished to spend her remaining hours at the Magic Kingdom, her favorite of the Disney parks. Before she set out that morning, Mrs. P’s sister-in-law presented her with a heaping stack of special “line jumper” passes — allowing immediate access to the ride-boarding area — that they had received from a Disney “castmember” (The Walt Disney Company’s universal word for “employee”) in order to pacify a (possibly-imagined and most-likely exaggerated) “horrible situation.” It was explained that they couldn’t conceivably use all of the passes they were awarded in their allotted time, so Mrs. P took them with the instruction: “use as many as you can.” With the majority of her group awkwardly traipsing their way across EPCOT, Mrs. P languidly strolled down Main Street, meandered through the faux-exoticism of Adventureland, leisurely moseyed along the wooden-planked walkways of Frontierland and lazily sauntered the winding paths of Fantasyland. As dusk approached and the ambient lights came on, the once sun-brightened surroundings now sported an otherworldly glow and Mrs. P found herself in Tomorrowland. Choosing a ride on the fearsome Space Mountain as the capper to her visit, she entered the queue line and distributed fistfuls of the special passes to delighted strangers who happened to be in the right place at the right time.  At the ride’s conclusion, she was breathless and parched. She reached into her backpack for a bottle of water. With her thirst sufficiently quenched, she headed towards the still-open shops on Main Street when her cellphone rang. It was her brother.

“Are you still at the Magic Kingdom?,” he inquired.

“I forgot to get Mouse Ears for the girls. Can you get them?” he asked, hopefully. It was nearing closing time on the last day of a six-day vacation and it had just occurred to my brother-in-law that the single most popular Disney souvenir had not been purchased for his children.

“I’d be glad to.,” my wife answered cheerfully. She truly is the nicest person on this otherwise God-forsaken planet. She memorized the details of her brother’s request, dutifully noting the style of head wear and the desired inscriptions, and made a beeline towards the Main Street hat shop. Engulfed by the throng of exiting guests, she came upon a cheerful group of castmembers wearing Mickey Mouse-style gloves and waving “Good Night” to the tired and contented patrons. Mrs. P thought this would make for a great photo of Pudge. She opened her backpack to retrieve her camera and, to her horror, Pudge was gone. A cold sweat burst upon her forehead, her throat tightened and her heart thumped uncontrollably in her chest. She tossed the contents of her backpack from side to side. Pudge was indeed gone. Tears began to well in her eyes as she frantically scanned the ground in her immediate area. Panicked, she retraced her steps for several yards and replayed her recent activity in her mind. Space Mountain, water, phone call, castmembers. It all swelled into a big confusing blur. Suddenly, a lucid thought was triggered and she beat a determined path to the renowned Lost & Found at Main Street’s City Hall.

Taking her place at the end of a line populated by the optimistic owners of lost sunglasses and misplaced flip-flops, a tearful Mrs. P fidgeted until the woman in front of her said, “You look like you lost something very  important. Please. Go ahead of me”. My wife thanked her and approached the castmember behind the desk. With tears streaming down her cheeks, my wife’s voice cracked as she spoke.

“I lost a small brown plush bear. He has a red and blue striped shirt and I am not leaving this place without him.”

The young lady behind the desk smiled reassuringly and said, “Just a minute. I’ll look.”

A few excruciatingly-long moments later, the young lady emerged from a hidden cache somewhere behind the reception area. Resting in the cupped hands of her outstretched arms was Pudge. “Is this him?,” she asked. Before she had reached the word “him”, Mrs. Pincus had nearly leaped over the desk and snatched Pudge out of her hands. She hugged the little bear to her face, wetting his matted, plush fur with her tears. She thanked the City Hall staff profusely, still crying. Somewhere between Space Mountain and the end of Main Street, Pudge must have tumbled out of the backpack. Then, a thoughtful, concerned and compassionate guest picked him up and brought him to the Lost & Found, figuring that someone might be looking for this little, and obviously, well-loved bear.

And Mrs. Pincus still managed to get the Mouse Ears for her nieces.

Footnote: Pudge still travels with us, only now he uses this helpful accessory.