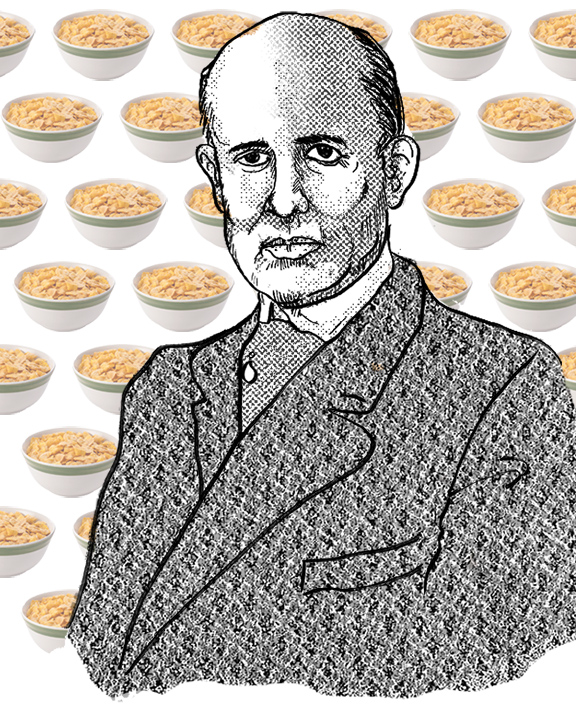 As a visitor and patient of John Harvey Kellogg’s Battle Creek Sanitarium, C.W. Post was impressed and inspired to start his own cereal company. Concerned with his own health, Post invented a cereal alternative to coffee that he dubbed “Postum”. Postum was made from wheat bran, wheat, molasses, and maltodextrin from corn. It was never presented as a coffee substitute. Instead, it was marketed as a healthful, caffeine-free alternative. The beverage was slow to catch on at first, but became increasingly popular among those worried about the negative effects of caffeine. The Mormon culture endorsed Postum due to their abstention from coffee. During World War II, Postum enjoyed a huge rise in popularity as the population sought a replacement for government-rationed coffee.

In 1897, Post introduced another of his inventions – Grape Nuts cereal. Originally marketed as “brain food”, Grape Nuts became a popular breakfast food, owing to its unique flavor and texture, although it contains no grapes and no nuts.

As Post’s business increased, he introduced more varieties of cereals, including his own corn flakes, first called “Elijah’s Manna”, then later Post Toasties. Post was one of the first companies to offer a discount coupon as enticement to try their product. Through advertisements, a “One Penny Off” certificate was made available to the public.

As his business grew, Post amassed one of the largest fortunes of the early Twentieth century. However, in late 1913, his declining health forced him to cancel public appearances. In 1914, convinced he was suffering from stomach cancer, Post committed suicide by gunshot. His only child, 27-year-old Marjorie Merriweather Post, inherited his company and his fortune. (Marjorie went on to marry financier E.F. Hutton. Their daughter is actress Dina Merrill.)