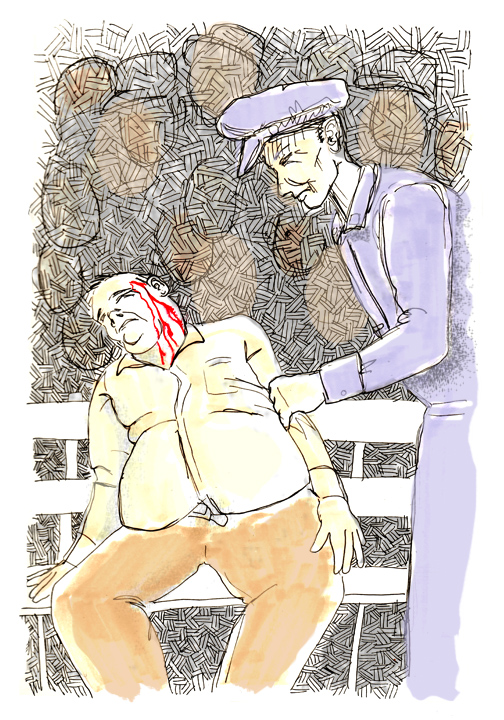 On Independence Day 1950, Barney went to an early Mass, had a quick breakfast and picked up a friend’s son, Otto Flaig, to make good on a promise to take the boy to a ball game. They arrived at the Polo Grounds in Upper Manhattan and found their section in the packed stadium. The sky was clear and it was a beautiful day for a double-header between the Brooklyn Dodgers and Barney’s beloved Giants. At twenty minutes after twelve noon, the Dodgers took the field for batting practice. In seat 3, row C, high in grandstand section 42, facing the Coogan’s Bluff section of New York, Barney leaned over to tell his young companion something above the din of the crowd. Suddenly, a bullet drilled into Barney’s left temple and he slumped back, dead before his back hit the bench. Police and medics pushed their way through the unruly crowd to the scene. As medical staff carried Barney’s body away, some of the standing-room patrons fought for the now-vacant seat. Otto was annoyed when policemen ushered him away for questioning, claiming he was missing the game  a game he had been dreaming of for a month.

Subsequent investigation determined that 14 year-old Robert Peebles had climbed to the roof of his Coogan’s Bluff tenement and fired the one bullet he had saved for the July 4th celebration from his .45 caliber gun. Robert stood behind a five-foot high retainer wall, 1,200 yards from the Polo Grounds, when he pulled the trigger. He couldn’t even see the ballpark from his position. He was charged with juvenile delinquency.