The new Monday Artday challenge is to redo a famous painting. I did this for another illustration website a little over a year ago. My version of Mademoiselle Caroline Rivière by French Neoclassical artist Jean Auguste Dominique Ingres can be seen here. For the current challenge I chose two paintings that are linked, but for a ridiculous reason. 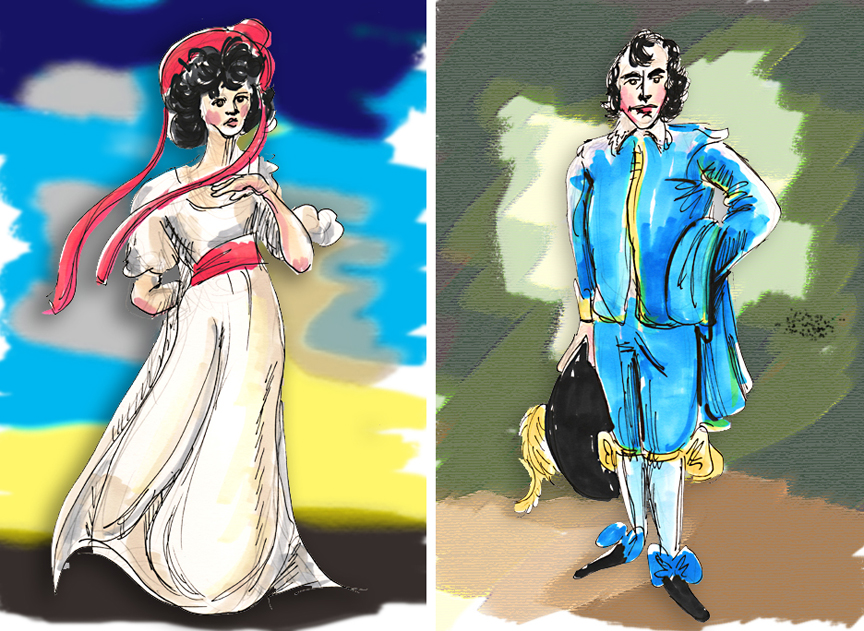 Pinkie  by Thomas Lawrence, a delicate portrait of eleven-year old Sarah Barrett Moulton and Blue Boy  by Thomas Gainsborough, a portrait of a young man believed to be Jonathan Buttall, the son of a wealthy hardware merchant, were purchased by American railway pioneer Henry Edwards Huntington and displayed opposite each other in his private collection at, what is now, The Huntington Library in San Marino, California.

Since their chance pairing in the early 1920s, many gallery visitors have mistakenly attributed the two paintings to the same artist. In reality, Blue Boy  depicts a young man in period costume from one hundred and fifty years earlier and Pinkie  is a contemporary painting (for 1794) of a young girl dressed appropriately for the late eighteenth century. In addition, the paintings were completed twenty-five years apart. The actual identity of Blue Boy  remains a mystery, but years of research points to young Buttall as the most likely model. Pinkie  was commissioned by the grandmother of Sarah Barrett Moulton, aunt of poet Elizabeth Barrett Browning, although young Sarah passed away just a year after the painting’s completion.

William Wilson, author of The Los Angeles Times Book of California Museums, calls them “the Romeo and Juliet of Rococo portraiture”.