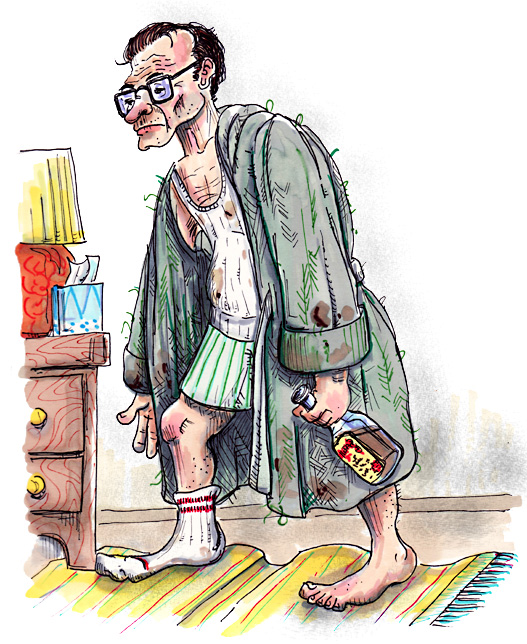 In 1939, ruggedly handsome, gravelly-voiced William Holden had the starring role in Golden Boy  opposite Barbara Stanwyck. He followed that with minor, forgettable parts through the 1940s until his breakout role as Joe Gillis in Billy Wilder’s classic  the hauntingly memorable Sunset Boulevard  in 1950. William received his first of three Best Actor Oscar nominations for the part and his career took off. Perfecting the part of “everyman” leading man, William won the Academy Award in 1953 for another Billy Wilder vehicle, Stalag 17.

William was one of the top box office draws of the 50s, appearing in Picnic, Bridge on the River Kwai, the controversial The Moon is Blue and opposite Humphrey Bogart and Audrey Hepburn in Sabrina. He started a romantic relationship with Hepburn during filming until she broke it off when William revealed he had undergone a vasectomy.

By the 1960s, William’s films had less commercial success, but due to contractual obligations he was forced to make them. In 1964, he was paired again with a now-married Audrey Hepburn in Paris When It Sizzles.  He tried to rekindle a romance, but was rebuffed. That uncomfortable situation coupled with William’s increasing alcohol consumption had disastrous effects of the film’s production. William’s advanced alcoholism began to take its toll. In 1966, he was convicted of vehicular manslaughter in Italy after a car accident in which he killed the other driver.

In 1974, William Holden, now beginning to show his age,  joined the all-star cast of the disaster film The Towering Inferno  and two years later he earned his third Oscar nomination for a role more suited to the acting talents of his heyday as Max Schumacher in the acidly-satiric Network.  He lost to costar Peter Finch, who received the first posthumous performance Oscar.

In the early 70s, William began a relationship with Stefanie Powers, an actress 24 years his junior and famous for the TV series Hart to Hart. She was very aware of his drinking problem.

In the early 80s, William was a part owner of an apartment building in Santa Monica, California, and he lived in a unit on the fourth floor. He was known to be a very private person, sometimes not emerging from his apartment for days. In November 1981, the building manager became concerned after not seeing William for several days. He used his passkey to enter William’s apartment. Upon entering the bedroom, he found William’s body partly clad in a bathrobe and lying in a pool of blood. There was a large gash in William’s forehead and he was surrounded by bloody tissues and a rumpled throw rug. A wooden nightstand was obviously moved from its original position and the far corner of the square top was jammed about three inches into the wall. An empty bottle of vodka was found in a trash can and several beer and liquor bottles were found in the kitchen. A subsequent autopsy concluded that a drunken William (with a blood alcohol level of .22) had tripped on the rug and smacked his head on the table, resulting in the wound. He hit the table so hard, he drove it into the wall. Not realizing the severity of his injury, he attempted to stop the bleeding with Kleenex until he passed out from loss of blood. When he was found, he had been dead for almost four days. There was a working telephone just inches from his body. William Holden was 63.