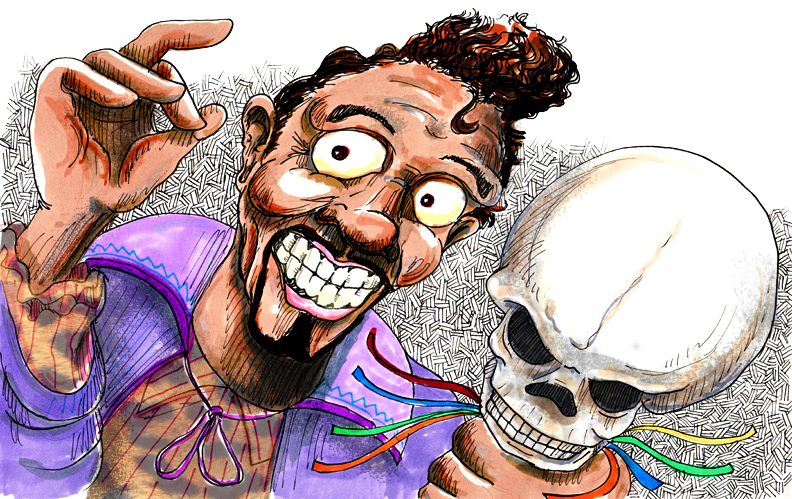 After a failed attempt at becoming an opera singer in the style of Paul Robeson, Screamin’ Jay Hawkins settled on playing piano and singing standard blues.

Soon, he was called to service with the Air Force in World War II. Hawkins told horrific accounts of being held captive and tortured. He claimed that after his rescue, he taped a hand grenade in the the mouth of his tormentor and pulled the pin. Upon returning home, Hawkins was an active boxer and became the 1949 Alaska middleweight champion.

In 1951, Hawkins returned to music, where he became renowned for his stylish fashions of leather and leopard skins, along with his inspired piano playing. In the middle 1950s, he, along with a studio full of drunken musicians, recorded “I Put a Spell on You”. What was planned to be a ballad became a raucous guttural recitation, punctuated by Hawkins grunts and yelps over a throbbing bass line. The performance was mesmerizing, although Hawkins himself blacked out and was unable to remember the session. Afterward he had to relearn the song from the recorded version in order to perform it live. It became the biggest commercial success of Hawkins career, selling into the millions upon its initial release. Hawkins’ stage antics featured his entrance in a coffin, voodoo-influenced props, rubber snakes and Henry  a skull on a stick. He is recognized as the first “shock rocker”, paving the way for acts like Screaming Lord Sutch, Black Sabbath, Alice Cooper and Marilyn Manson.

Despite a career that spanned five decades, releasing over two dozen albums and singles and touring with bands like The Clash and Nick Cave and the Bad Seeds, Hawkins never achieved the continued success that his first song promised. After surgery to treat an aneurysm in 2000, Hawkins passed away at the age of 70. When news of his death spread, a contingency of people stepped forward claiming to be Hawkins’ children the result of relationships with a multitude of women. Careful review of documentation esimated that Hawkins had fathered 75 children in his lifetime. He sure put a spell on someone.