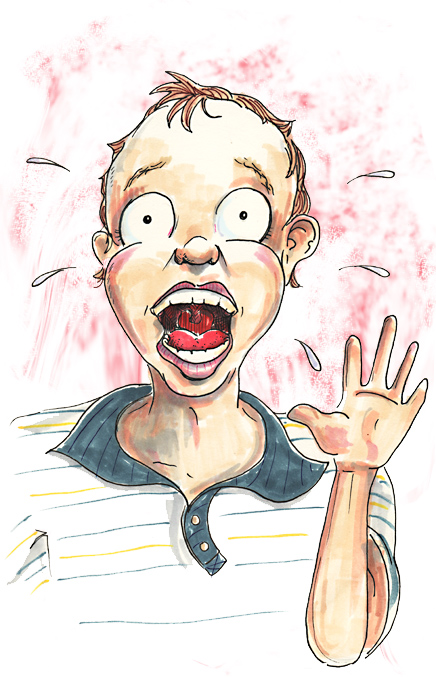 “A baby is an alimentary canal with a loud voice at one end and no responsibility at the other. ”

Several evenings ago, there was a family dinner at my in-law’s house. My wife and I attended, along with my wife’s younger brother, his wife and two daughters, ages… um… somewhere between four and eight… or something close to that. Also on the guest list were my wife’s cousin, her husband and two young sons, both in the approximate age range of my nieces. My thirty-year-old niece was there too, but since she is relatively well-behaved and doesn’t fit into the “child” category anymore, she will merit merely this mention in the story.

Dinner proceeded like most dinners, with cross-table conversation punctuated by clinking glasses, rattling flatware and my father-in-law rolling his eyes in exasperation and saying, “I can’t hear you.” As usual, the children picked, uninterested, at their meals and bolted from the table early while the adults lingered over their plates. My eldest niece (hmmm! Two mentions!) stealthily began the preliminary clearing of the table to ready it for dessert. The living room, adjacent to the dining room, came alive with the unruly loudness of four rambunctious young cousins. The noise settled slightly after a visit by one of the parents  impatiently prompted by my father-in-law. Still, the muffled sounds of children’s voices could be heard, though no actual words could be discerned.

The hushed tones from the living room, it would soon be revealed, was my niece (not the thirty-year old. Jeez! Three mentions!) recounting the legend of Bloody Mary for the benefit of her cousin. The tale of Bloody Mary, for those who never attended camp, never attended a public school or was never a kid surrounded by other kids, is a word-of-mouth ghost story. Although it has various origins and numerous colloquial nuances, the basic story remains. The evil spirit of a woman of undetermined background can be invoked by facing a mirror in a darkened room (usually the claustrophobic confines of a bathroom) and reciting her name  “Bloody Mary”  a specific number of times (anywhere from three to a hundred, depending on whose giving the instructions). My niece, at eight years of age, is a voracious reader, an avid TV and movie junkie and, just like her father at that age, a budding horror fan. Unfortunately, most children are scared shitless by things of that nature, and much to her delight, her slightly older yet very impressionable boy cousin was no exception. And judging by the sly smile spread across her lips, she knew that would be the result.

As the evening wound down, my wife’s cousin rounded up her family and, as all good mothers are prone to do, insisted that her children visit the bathroom before the long drive home. Her older boy, the recently spooked one, reacted as though he was just asked to ingest a healthy serving of cockroach and broccoli casserole. His eyes widened in terror and his feet remained firmly planted as his mother directed him towards the small powder room just off the dining room. “No!,” he shrieked, his face growing flush, then pale. His parents exchanged bewildered glances. The poor boy shook with real fear as he protested any persuasion to get him to enter that bathroom. My mother-in-law, my father-in-law, his mother and his father (okay, maybe not  his father so much) tried to reason with the terrified child, as his younger brother danced with indifferent joy, revelling in the fact that the journey home was being temporarily delayed. “There’s nothing to be afraid of!,” his mother said, “It’s just a bathroom.” My father-in-law suggested they take advantage of the bathroom on the second floor. That was just as bad, because obviously to the frightened boy, Bloody Mary’s portal to the world of the living was any  bathroom and he wanted no parts of any of them. He continued his ear-splitting screams until my niece sheepishly admitted that she may have  inadvertently mentioned  part of a story that may have implied  that an evil, child-grabbing ghost lived inside all mirrors. Bringing it out in the open didn’t help. That kid was not going into the bathroom. He screamed louder, pleading to be taken home “right this instance”, as he put it. Finally, my mother-in-law took the frantic boy aside and leaned over to present her proposal face to face. With his full attention, my mother-in-law produced a large and shiny silver dollar from her pocket. She explained that if he entered the bathroom and completed the task that customarily takes place in a bathroom, this silver minted beauty would be his. He briefly considered, turned on his heels and while unbuttoning his pants, slammed the bathroom door behind him. One tinkle later, he emerged to collect his reward.

Money trumps everything. Even ghosts.