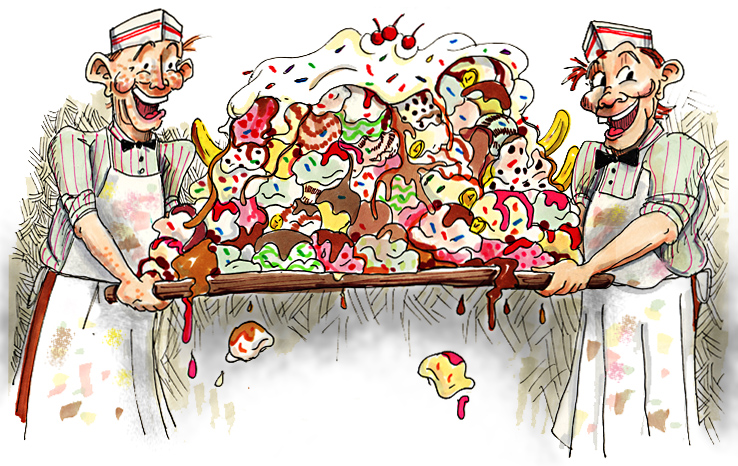 When you’re a kid, dessert is always the best part of a meal. Who doesn’t love to find a package of Yodels in their lunch at school or have dinner followed by a chilled bowl of Jello or a slice of the cake you hungrily watched Mom bake and frost that afternoon? When I was younger, there was no better dessert than ice cream at Greenwood Dairies. Maybe what made it so great was the ritual involved in a visit to the Bucks County, Pennsylvania landmark.

My mother had three brothers. They were three bad-ass youths who lived briefly in rural Oklahoma before settling in Philadelphia with their immigrant parents. (Actually, the family was asked to leave after the three brothers burned down a barn.) There was gravelly-voiced Abe, who resembled Manny from The Pep Boys, but with a pipe instead of a cigar. There was boisterous and barrel-chested Nat – burly, animated and childlike. He was a magnet at family gatherings, with nieces and nephews lining up to be the next one tossed in the air and caught in Uncle Nat’s huge protective hands. My mother’s oldest brother was Sam. Sam was a wonderfully balanced combination of gruff and sweetness, not unlike Ed Asner’s portrayal of Lou Grant on The Mary Tyler Moore Show. Even though Sam was eighteen years older than my mom, he was warm and friendly and since he and my Aunt Dorothy had no children of their own, he felt a special bond with those of this little sister. My mother loved and felt closest to her brother Sam and he was the only one of my mom’s siblings that my father could stomach.

Several times during the summer, Uncle Sam and his wife, Aunt Dorothy – a lovely and genial amalgam of Katherine Hepburn and Carol Channing – would drive from their tiny and cluttered apartment on the second floor of Sam’s rare book store to our cookie-cutter neighborhood in Northeast Philadelphia. My brother and I loved visits from Sam and Dorothy. They’d pull up into our driveway in a shiny new car, usually twice the size of my father’s current vehicle. My brother and I would run out to the front lawn and watch as Sam ambled around to the open the car door for his wife in the most gentlemanly fashion. Sam and Dorothy would sit on the sofa in our living room and have the “catching-up-with-family” conversation with my mom while my dad stood at the front door and smoked one cigarette after another. My brother and I would play at their feet on the turquoise carpet, occasionally interjecting into the conversation. But we were actually just biding our time until we heard the announcement we anticipated. The announcement that capped every visit from Sam and Dorothy. “Do the boys want to go to Greenwood Dairies for ice cream?,” Aunt Dorothy would covertly whisper to my mother. Oh, damn straight we do! What took you so long to ask? was the look that swept across my face. By the expression on my brother’s face, the sentiment was the same.

Greenwood Dairies was a twenty minute drive up Route One in Langhorne, Pennsylvania. Aside from stuffing ourselves with creamy summertime treats, my family’s only other reason to make the trek to Langhorne was to trade in one of our two current automobiles for a new used one at Reedman’s, a sprawling car dealership where everyone in Northeast Philadelphia bought their new used cars. My brother and I (mostly me) fidgeted in the back seat of Sam and Dorothy’s car until we recognized the crunch of gravel under the tires alerting us that we had pulled into Greenwood Dairies’ parking lot. Greenwood Dairies was a large, odd-shaped structure made odder by years of additions to the original building. The spacious eating area was crammed with green and cream-colored vinyl booths around the perimeter and chrome-trimmed tables with matching chairs upholstered with the same green and cream vinyl. A massive gold-flecked Formica counter snaked through the dining room equipped with stools whose metallic green cushions spun when given a good flick of the wrist. We bounded through the doors and waited with Aunt Dorothy for a table in the bustling seating area. As my brother and I occupied ourselves by spinning the aforementioned stools, Uncle Sam made a beeline for the retail store on the far side of the restaurant to buy a bag of Rold Gold pretzels. Sam couldn’t eat ice cream if it wasn’t accompanied by pretzels. They were like another utensil to compliment his spoon.

Once seated, Aunt Dorothy would shiver and express her dislike for how low they kept the thermostat. Despite wearing a sweater draped over her spindly shoulders, a single opalescent button clasped at her throat, she still hunched over trying to generate warmth. Her gray hair was pulled impossibly tight to the back of her head where it all met in a thick bun tamed by two wooden sticks and a network of bobby pins. As she bent forward to read the plastic-covered menu, her bun bobbed atop her head silently surveying the room. Reading the menu was only a formality, as we always ordered the same thing. Sam would order several scoops of various flavors of ice cream topped with whipped cream and jimmies*. Dorothy would order a fruit-flavored ice cream, usually peach or cherry vanilla. My brother would get two scoops of vanilla or, if he was feeling adventurous, vanilla fudge. I’d get the “Clowny Sundae”, an inverted ice cream cone on a plate with a cake-frosting face decorating the scoop, the pointed cone mimicking a clown hat. Dorothy would also request that the waiter bring two small gravy boats – one filled with marshmallow sauce and the other with hot fudge – each to be added to our desserts at our liking. Once our orders were placed and the waiter scurried off to the preparation area, Sam would pretend call the waiter back to change his order. “Instead,”, he’d announce, “I think I’ll get a Pig’s Dinner!”  The Greenwood Dairies “Pig’s Dinner,” if the memories of a seven-year-old serve me correctly, was a mountain of four thousand scoops of every ice cream flavor the dairy offered, blanketed in fudge and strawberries, slathered in marshmallow and butterscotch sauces, dusted in nuts, fortified with fifty-seven sliced bananas and crowned with enormous, fluffy clouds of whipped cream and a single cherry. (Perhaps I have gotten some of the quantities wrong, but you get my point.)  Every time we went to Greenwood Dairies, invariably one brave diner would order the Pig’s Dinner.  The staff would ring bells and blow whistles and make a general fuss. When the frozen concoction made its arrival to the patron’s table, it did so perched majestically upon a wood stretcher transported by two paper-hatted and aproned teens. They presented the customer with a single spoon and, amid thunderous applause, he would dig in! My brother and I marveled at Uncle Sam. Would this be the actual time he would actually order it? Of course, my Uncle Sam never ordered the Pig’s Dinner, but he feigned the threat on every subsequent visit.

When my brother and I got older and preferred the company of our friends to that of our extended family and the taste of cheese fries and beer overtook the appeal of a Clowny Sundae, the visits to Greenwood Dairies stopped. Soon, we settled for the offering of close-by ice cream chains like Friendly’s, rather travelling the extra distance to Langhorne. Sam and Dorothy continued their regular visits into my teens until my early twenties when I got married and moved out of my parent’s house. By that time Greenwood Dairies had permanently closed its doors. The quirky maze of buildings was razed and Reedman’s expanded their dealership into the newly available grounds. Although many claims have been made by friend’s brothers and neighbor’s cousins, I still don’t know anyone who ever conquered the Pig’s Dinner.