This week’s challenge word on the Illustration Friday website is “double”. 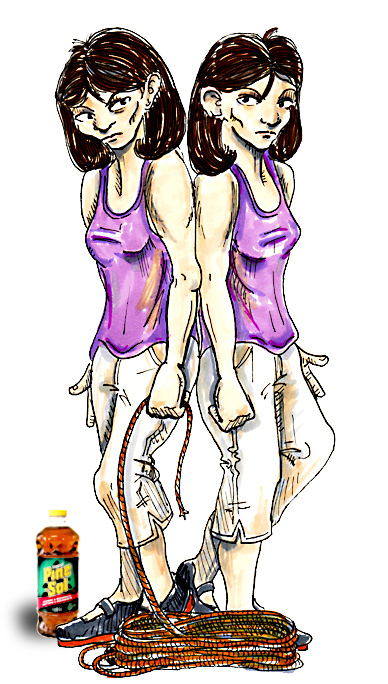 Identical twins Jeen and Sunny Han were born in South Korea in 1974 but lived apart until they were 3. When the girls were 12, their mother, a chronic gambler, moved them to California. She would leave the young sisters alone for days at at time while she went on gambling binges. Jeen and Sunny developed a strong bond during their time together. Their mother sent the girls to live with an aunt and uncle when she no longer wanted to be burdened with parental responsibility.

Both girls excelled academically and graduated high school as co-valedictorians. Sunny went on to college on a scholarship. Jeen, seeking money for college, joined the US Air Force. The twins grew apart and only spoke briefly by phone over the next several years.

Overwhelmed by the rigors of boot camp, Jeen sought a discharge from the Air Force. First, she explained that her father was ill and then, hoping to be expelled over policy, claimed she was a lesbian. Eventually, the Air Force relented and she was released. from service. Jeen found employment as a blackjack dealer in a Lakeside California casino. Like her mother, she became a compulsive gambler. She began stealing friend’s’ and family’s checks and credit cards to repay her debts. She was arrested and skipped out on her probation.

Jeen moved to Los Angeles to live with her twin sister. Sunny, having delivered failing grades for three semesters, lost her scholarship and was working as a receptionist. The sister argued a lot. Sunny broke Jeen’s nose during one dispute. Others were broken up by the police, where Sunny was arrested on an unrelated charge of credit card fraud. Sunny had stolen a friend’s credit card. While Sunny was in jail, Jeen stole Sunny’s car and used her identification to empty her savings. Upon Sunny’s release, Jeen was jailed for six months. She was put on work furlough and escaped.

Soon after, an angered Jeen recruited two teenagers to help her kill her sister. They drove to Sunny’s apartment, purchasing garbage bags, duct tape, twine, gloves, Pine Sol cleaner, and magazines on the way. The also brought guns. Their plan was to have one of the teens pose as a magazine salesman to gain access to the apartment. Then the other two would force themselves inside. This scheme played out perfectly, except the door was answered by Sunny’s roommate, Helen. They tied Helen up, but Sunny, hearing the disturbance from the next room, called the police on her cellphone. The police arrived quickly and arrested one of Jeen’s accomplices, but she left along with the other. Later the same day, Jeen was arrested when she attempted to used Sunny’s driver’s license to withdraw $5,000.

After  a year in jail awaiting trial, Jeen Han was tried for conspiracy to commit murder, two counts of burglary, possession of a firearm, and two counts of false imprisonment. The two teenagers were also tried as co-conspirators. Jeen contested that she merely wished to scare her sister, not kill her. The jury concluded that the items brought to the scene, coupled with Sunny’s roommate’s testimony, amounted to Jeen’s preparation to commit murder. During the course of the trial, an overly stressed Sunny Han attempted suicide by ingesting several dozen sleeping pills.

The two conspirators received sentences of eight and sixteen years. Despite her attorney’s argument that Jeen suffered from a personality disorder that predisposed her to extreme mood swings, Jeen Han was sentenced to 26 years to life. Three days after her incarceration, Jeen attempted suicide with painkillers she had hidden in her cell.

She will be eligible for parole in 2020.