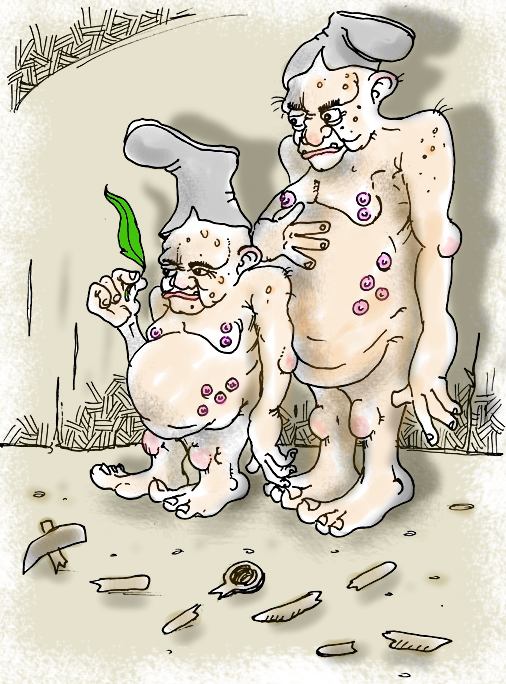 Between the Upper Palaeolithic and the Late Stone Age, a forgotten civilization existed briefly. Archaeologist would rather it remain forgotten. These ancient people were called the Ineptics and carbon dating has determined that they roamed the early Earth for approximately seven weeks. There are few things known about them, but what is known is that they were remarkable in their intelligence. Or, more precisely, their lack thereof.

Physically, the Ineptics ranged in height from three feet to five feet tall. They were relatively hairless, except for a few unsightly tufts here and there on their bodies. The males of the species had seven nipples, with one on the right breast, two on the left and four on the lower left abdomen. All seven served no function whatsoever. They had three fingers and a thumb on each hand and three thumbs on each foot. They possessed prominent lower lips, though not large enough to confine several protruding teeth. The Ineptics did have dentists among them, but dentists in their society delivered the mail.

The Ineptics were the first to develop shoes, however they wore them on their heads. They hunted for food, mostly birds. When the birds were caught, they plucked them and ate the feathers, discarding the meat. They cooked the feathers by breaking up and burning the rudimentary tools they had fashioned.

The Ineptics attempted cave paintings by dragging long leaves across cave walls. The leaves were not dipped in pigment of any kind, so they left no marks.

The males wandered around in circles, often bumping into each other. The women of the group were known to throw up their hands in disgust and leave. The entire species eventually died out when they all wandered off a cliff.