The current illustration challenge on the Monday Artday website is “monkey”. 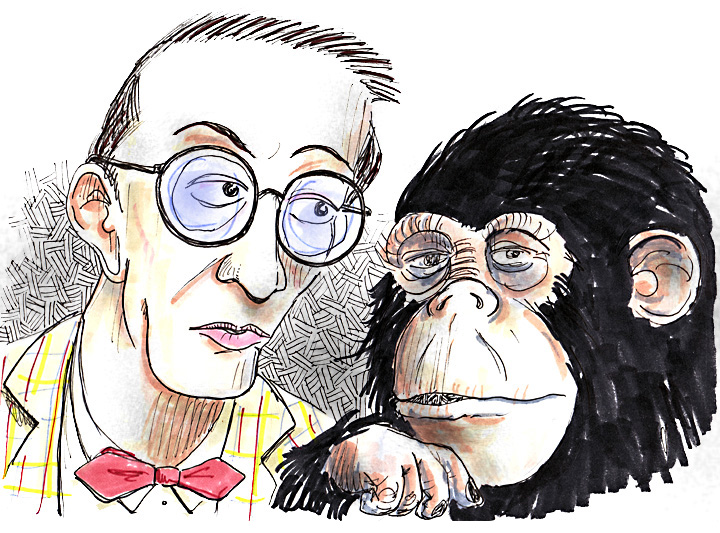 The early morning campfire gathering that is the current  “Today” show came from very humble beginnings.

“Today”, the brainchild of then NBC vice-president Pat Weaver (actress Sigourney‘s father), made its debut on January 14, 1952. Weaver hand-picked Dave Garroway, a television journalist who hosted a show in Chicago that NBC sporadically carried, to serve as host of his new endeavour. Since “Today” was the first attempt at this type of broadcast, Weaver had free reign as far as format. As a novelty, Weaver chose one J. Fred Muggs as Garroway’s co-host. Muggs was born in French Cameroon and came to New York at an early age. He was a lively and somewhat mischievous performer and his antics delighted viewers of the new show. Muggs was also a monkey.

Garroway and J. Fred Muggs were important contributors to the early success of the “Today” show. Viewers loved the pair’s interaction with guests, especially when J. Fred would whip Garroway’s glasses off of his face during interviews. An often-denied rumor related a time that J. Fred bit the elbow of comedienne Martha Raye. J. Fred was featured in children’s books and games. At the height of his popularity,  J. Fred’s likeness was reproduced as puppets and plush toys.

Garroway always displayed a smile and a relaxed manner on the air. His signature sign-off was a warm smile and saying “Peace” as he raised his open palm to the camera and the home viewers. Despite gossip, he got along well with J. Fred. It was NBC management he had difficulty with. Garroway suffered from chronic depression. To ease his pain, he self-medicated with a daily mixture of vitamin B-12 and the stimulant Dexidrine. He would sometimes disappear during live broadcasts, leaving announcer Jack Lescoulie to quickly cover. In 1961, a delusional Garroway, greatly affected by the recent suicide of his wife, lay down on the studio floor, refusing to leave until his contract demands were met. NBC fired him.

Future NBC News anchor John Chancellor replaced Garroway as the host of “Today”. NBC felt that J. Fred Muggs didn’t fit in with the new format. J. Fred Muggs briefly starred in a local kids’ show in Newark, New Jersey and then, for five years, performed at Busch Gardens in Tampa, Florida. He retired to Citrus Park, Florida under the care of his original trainer’s son. Dave Garroway, however, was found dead of a self-inflicted gunshot wound in 1982.