This week’s challenge word on the Illustration Friday website is “hatch”. 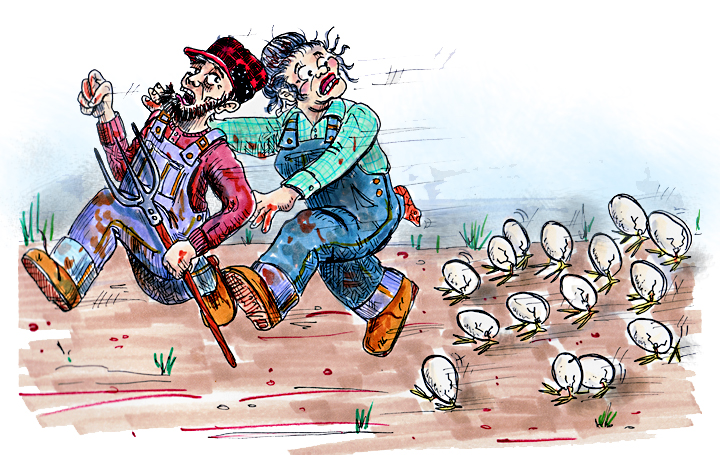 “Hurry up, Ma! Hurry before they hatch!”

A little background…
I was at a total loss for this challenge when it was announced early on Friday morning. My mind was blank. I had no ideas at all. That afternoon, I went to lunch with my boss and a supplier to a restaurant in Philadelphia’s famous Chinatown. This particular restaurant specializes in dim sum  for lunch. The dim sum ritual is quite unusual for those unfamiliar with it. Actually, it is quite unusual for those that are  familiar with it. Diners are seated at their tables and given a “scorecard”. The dining room is filled with women quickly pushing carts around the maze of tables. The carts are laden with multiple servings of various bowls and plates of exotic (and sometimes unrecognizable) tidbits of Chinese delicacies. The carts make brief stops at each table and the “driver” points to and identifies each offering in quick, broken English. If a selection is desired from that cart the “driver” plops the item down on the table and makes a notation on the table’s scorecard. To someone experiencing this for the first time, its pretty surreal.

On Friday afternoon, my two voracious and adventurous (and carnivorous) dining companions sampled fried squid and steamed buns stuffed with pork and green-and-brown-something-or-other. For me, the lone vegetarian, there was spicy eggplant, steamed vegetable dumpling and… did I mention the eggplant?  I had to resort to ordering noodle and mushroom soup from the regular menu to make it look like I was actually eating.

The inspiration for my illustration came from the first item offered, almost as we were seated. A stout young Asian woman parked her cart next to our table and displayed several steamy temptations. One of the dishes caught the attention of Howard, our luncheon partner and commercial printing vendor. It was a silver serving bowl containing four browned, bony tridents that was identified as “chicken feet”. Howard nodded affirmatively and, in one motion, the woman dropped the bowl on the table and marked off our scorecard. I noted, in an aside, to Howard that the waitress said “feet – chicken feet”  in case he had misunderstood which part of a chicken he had just ordered. He waved me off, not taking his gaze off of those shriveled glazed tootsies. My boss and I marveled as Howard jabbed his chopsticks into the bowl and transferred one to his small plate. He tore into its outer layer and sort of picked at the spare contents inside. After a “tastes like chicken” comment, he convinced my boss to try one. At first she seemed absolutely turned off by the idea, especially since she mentioned that it looked as though the appendage was giving her “the finger”. But, after Howard applied some schoolyard-style coaxing, she gave in. She prodded one of the feet and tasted a microscopic piece. She politely smiled and the unfinished portion remained on her plate for the rest of our meal. Personally, I was a little uncomfortable having that thing on the table.
I half-expected the rest of the chicken to come looking for it.