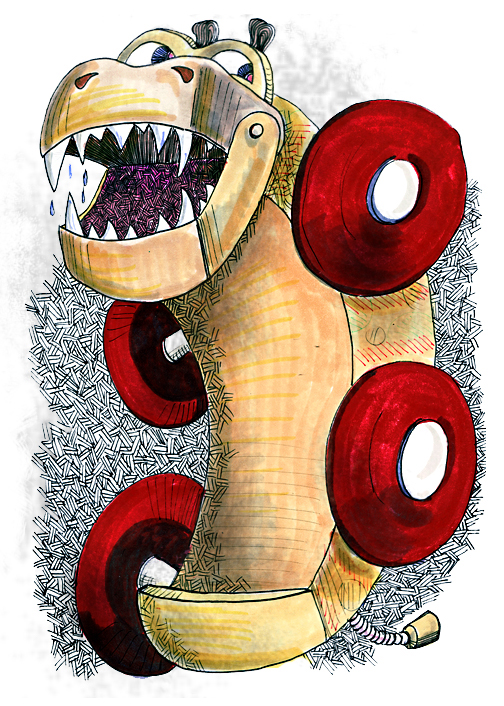 1965 was a tumultuous time. The country was still healing from the wounds brought on by a presidential assassination. Alabama state troopers clashed with civil right activists in Selma. The first wave of US Armed Forces was being deployed to the jungles of Viet Nam. In 1965, I fought a demon of my own.

My experience growing up in a middle-class household was pretty typical. My father was the breadwinner and provided for his family. For his trouble, he expected dinner on the table when he arrived home from work. After dinner, he wanted to sit in his chair, watch his television, smoke his cigarettes and not be bothered. Being bothered was my mother’s job. My mother did her best to maintain order in the house, yet she always seemed to be one step behind the chaos. My older brother was a very well-behaved child. He could always occupy his time with a book or his little plastic army men. I, however, was the itch in the center of my brother’s back that he could not reach. I was the out-of-control wild boy. I would have been labeled “hyperactive,” if such diagnosis existed in 1965. Instead, I was just called a “royal pain in the ass.”

When I was a kid, there were two categories of toys in my house. There were the ones that belonged exclusively to either my brother or myself and were not to be handled by anyone else under any circumstances. While my brother was respectful of that unwritten rule, I never could properly grasp the concept. Everything was fair game, as far as I was concerned. I had no problem breaking a toy that was believed to be solely my brother’s possession. The other classification was something my parents designated as a “share toy.” Oh God, did I hate those words. By the expression on my brother’s face when he was informed that a new plaything was deemed “a share toy,” he hated those words, too. “Share toys” sucked. Share toys had to be stored in neutral ground in our shared bedroom. There would no doubt be loud and vicious arguments over a “share toy,” usually resulting in a punch and someone crying. That someone was usually me. I’d run and seek the corrupt judgment of my mother, who would invariably rule in my favor, since I was the younger child. More often than not, I didn’t want the toy. I just wanted the satisfaction of watching my brother get a refresher course in the rules of a “share toy.” Upon witnessing my mother berate my poor brother with a barrage of “you should know better” and “you’re the older brother,” I’d wander off to find more trouble I could get into.

In late 1957, my parents purchased a house in the far reaches of newly-developed Northeast Philadelphia. With cookie-cutter houses packed into carbon-copy neighborhoods, the Northeast was like living in the suburbs, but still within the city limits. Much to my mother’s dismay, we saw my paternal grandparents often. My grandfather, who drove a city bus for a living, complained about the distance between my parent’s house and his own. “Why the hell would you buy a house out in that farmland?” he’d angrily ask, in a phone conversation with my father, prior to a visit. He’d begrudgingly drag my grandmother (who did everything begrudgingly) into his car and drive the most indirect and convoluted route to our house. Upon arrival, he’d complain — again — about the drive and my parents’ choice of residence. My father dutifully listened to his father’s grievances. My mother remained silent, in hopes of not prolonging the visit. My mother disliked her in-laws immensely and with good reason. She correctly pegged my grandfather as an ignorant, narrow-minded bigot and my grandmother as a mean and manipulative shrew. My father had been married briefly before he was married to my mother. My grandmother would buy gifts for my dad’s ex-wife and ask my mother’s opinion of her purchases. And my grandmother was a racist to boot.

One particular visit from my paternal grandparents was quite traumatic. It was August 1965 — my fourth birthday. Birthdays meant gifts and no matter how fragile the relationship was between my mom and my grandparents — a gift was a gift. After dragging themselves up our front lawn and an overly-dramatic recounting of their journey, my grandmother, in her most flamboyant fashion, presented me with a gaily wrapped box. I eagerly accepted it and commenced on a quick and sloppy removal of the colored paper keeping me from my present. And since this was my birthday, it was not going to be a goddamn share toy.

The torn paper yielded a brightly colored box, elaborately decorated in a circus motif. Happy clowns cavorted with smiling striped tigers. Monkeys swung on cages. Balloons and confetti abounded. My mom helped with the box flap as I excitedly anticipated what lurked inside. She withdrew a wooden hippopotamus adorned with brilliant yellow paper and the same circus images from its box. Adjacent to each of the toy beast’s painted legs was a bulbous, red, plastic wheel. My mom proudly displayed the figure in her hands — just inches from my face — as my grandparents observed with a smugness cast upon their faces. My grandmother took the toy from my mother’s hands and placed it on the gold-flecked linoleum of our kitchen floor. She gave a yank on the long braided string attached just under the hippo’s exaggerated jaw. As it rolled along on its wheels, that massive jaw opened and out came the most horrendous noise. It was a noise that emanated from the pits of fiery Hell. A noise comprised of equal parts tortured anguish and pure evil. It said, “BOP BOP BOP BOP BOP BOP!” It was repulsive and vile and scared the living shit out of me. I flew into my mother’s protective arms, squirming into the sanctuary of her bosom. My grandmother’s face sank in utter disappointment. She tried to calm me by talking sweetly about how nice the hippo was. I burrowed further into my mother’s shoulder, whimpering. I wanted no parts of that wicked creature. My mother managed get my father to put out his cigarette long enough to take me from her arms. She gathered up the hippo and its packaging and disappeared into another room. Within a minute, she returned to inform everyone that everything has been taken care of. I continued to peer cautiously around corners, knowing that thing was still in my house. The day ended with dinner followed by cake and ice cream and, happily, my grandparents leaving.

My mom was appalled that my grandmother would give something so frightening to me, but it sparked an idea. My mother was wonderful, but boy, was she devious. For the next several years, she used that hippo — now known in our household as “The Bop Bop” — as a motivator. If I procrastinated with homework or lagged in picking up my Hot Wheels cars, my mom would threaten me with taunts of “I’ll get the Bop Bop.” In seconds, I’d be hard at work on my school assignment or putting those toy vehicles back in their appropriate place. If my mother didn’t want me to go to a particular room in the house (for whatever reason), she would place the Bop-Bop on guard at the room’s entrance. I’d do anything to avoid an encounter with the malevolent Bop Bop.

One day, I must have been about six years old, I gathered my courage and faced the Bop Bop. I had discovered my mother’s hiding place for the hideous brute. While getting my coat from the hallway closet, I caught a glimpse of yellow and red on the top shelf. The Bop Bop sat in silence, its dead eyes gazing off to its right, its pert leather ears standing at attention. I froze in horror. Then, I stared at the evil bastard. I pulled out the metal stepladder that was stored at the back of the closet. I marched defiantly up the steps and snatched the Bop Bop off the shelf. I leapt off the ladder and ran for the door, clutching the Bop Bop tightly against my torso, but careful not to look down at it. I ran to the backyard and dropped the Bop Bop in the grass and, turning on my heels, darted back into the house. I panted heavily and leaned against a wall. Although I was winded, I was basking in the realization that I had rid my life of the dreaded Bop Bop.

The sky outside became overcast and the clouds poured rain on that Philadelphia afternoon. I climbed up on my parents bed and watched out the window as the Bop Bop got drenched in the abundant downpour. A week or so later, my mother came across the empty space at the top of the hall closet. When she questioned me on the whereabouts of the Bop Bop, I sang like a government informant. My mom went into the backyard to investigate my story and discovered a gray and splintered mound of waterlogged wood, its printed paper cover peeled off — torn and curled in the wet grass. Its mud-caked wheels fixed on rusted axles. She rounded up the mess and walked back to the house, stopping briefly to deposit her findings in the trash can in the side yard. My mom came back in the house and glared at me. She was mad. It didn’t matter. And any subsequent punishment wouldn’t matter either. 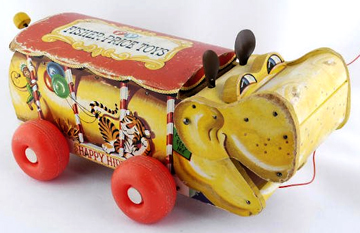