The Illustration Friday challenge word this week is “unbalanced”.
They don’t come much more unbalanced than Armin Meiwes. WARNING! His story is not for the faint of heart. 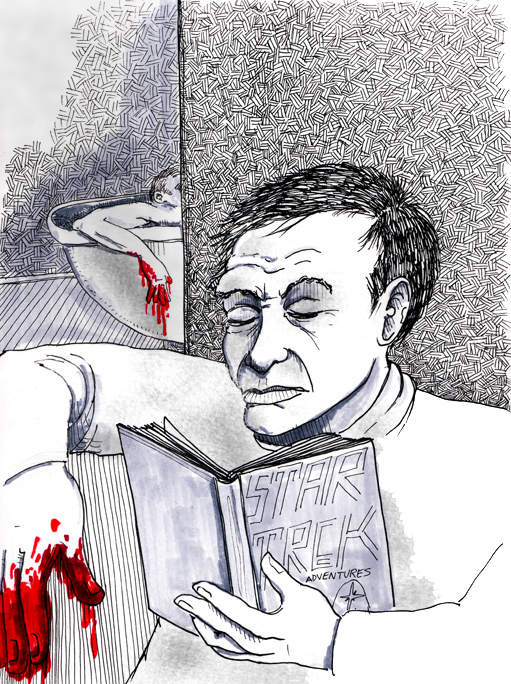 Armin Meiwes was an active member on the fetish fantasy website, The Cannibal Cafe. In December 2001, he posted a message seeking a dinner guest. After screening several candidates, he began more serious correspondence with fellow German Bernd Jürgen Brandes. Through a month of email conversation, Meiwes discovered, to his delight, that Brandes’ fantasy was to be killed and eaten. Meiwes was only too happy to oblige.

In March 2002, Brandes came to Meiwes’ home in Rotenburg. Meiwes gave Brandes large amounts of alcohol and painkillers. He then led Brandes to his bathtub to lie down. Once Brandes was properly anesthetized (but conscious), Meiwes cut off his guest’s male organ and fried it in a pan with onions and garlic. Meiwes served the cooked appendage to the two of them, as Brandes slowly bled to death. After they consumed as much as they could, Meiwes administered more alcohol and alcohol-based cold medication and left Brandes to die in the tub. Meiwes went into another room and read a Star Trek adventure book for three hours. Then, he returned to the tub, cut Brandes’ throat, and hung the body from a meat-hook. He began the task of butchering Brandes’ body for further consumption. He stripped, separated and bagged sixty-five pounds of Brandes’ flesh, which he stored in a chest freezer. He attempted to hide the bags under some frozen pizzas. Over the next ten months, Meiwes ate some of the flesh every day.

Meiwes was arrested in December 2002, after a college student contacted the police upon seeing advertisements for victims and details about the killing on the internet. Investigators searching Meiwes’ home found a videotape of the killing and approximately fifteen pounds of human flesh in the freezer.

On January 30, 2004, Meiwes was convicted of manslaughter and sentenced to eight and a half years in prison. Meiwes had admitted what he has done, although he debated the charge of murder, insisting that Brandes was a willing participant and was well aware of his fate.

Not satisfied with the manslaughter charge and the lenient sentence, a Frankfurt court retried Meiwes in 2006. He was found guilty and sentenced to life in prison.