This week’s word on Illustration Friday is “frozen”. 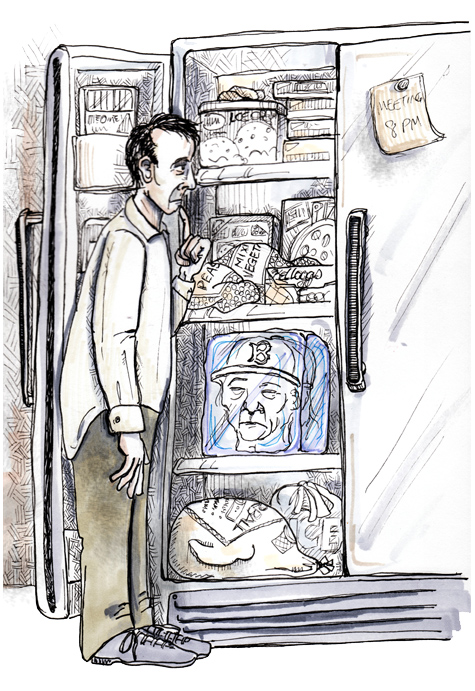 Ted Williams was one of the greatest players in the history of professional baseball. Despite his career being interrupted twice for military service, he was a two-time MVP and a seventeen time All-Star. He was the last player with a single season batting average above .400. Nicknamed “The Splendid Splinter”, Ted was inducted into the Baseball Hall of Fame in 1966. The only team he played for, The Boston Red Sox, retired his uniform number in 1984. In his final years, Ted suffered from numerous cardiac problems. He had a pacemaker installed in November 2000 and underwent open-heart surgery in January 2001. He died of cardiac arrest on July 5, 2002 at the age of 83.

After his death, Ted’s children battled over his final arrangements. Teds oldest daughter, Bobby-Jo, wanted to fulfill Ted’s wishes of cremation, with his ashes scattered in the Florida Keys. His children from his second marriage, John-Henry and Claudia, wanted their father to be cryonically frozen in liquid nitrogen at Alcor Life Extension Foundation in Scottsdale, Arizona. After a long and brutal struggle involving lawsuits, forged documents and criminal accusations among family, Ted Williams was shipped to Alcor, where his head was removed from his body and the two pieces were separately preserved.

In a 2003 Sports Illustrated article, fired Alcor executive Larry Johnson alleged that the company had mishandled Williams’ head by drilling holes and accidentally cracking it. Johnson also claimed that some of Williams’ DNA was missing. Alcor denied the allegations of missing DNA and explained that microscopic cracking can result as part of the process of freezing the head. Mr. Johnson asserted that, “They had his head in a container that is like a freezer chest … and it was malfunctioning. So, they wanted to move his head into another vessel to lower the temperature down to minus 321 Fahrenheit. So, they got a tuna fish can, and they put it in the bottom of that vessel. They set the head upside-down on top of the can and filled the vessel with liquid nitrogen. Well, obviously, after two or three days of being in that state, the can was stuck to the top of his head. A technician grabbed a monkey wrench, took a swing at the can and missed. He missed the can and hit the head. He drew back again, took a second swing, hit the can and sent it flying across the room.”

Concerned with the safety of his earthly remains and the dignity of his legend, Red Sox fans took action. After a marathon letter-writing and petition-signing campaign, The Red Sox Nation won the guardianship of Williams head. According to a detailed schedule, each fan in the Boston Metropolitan area will be awarded custody of Teds head for a period of three days. During this time, the custodian must keep the head frozen and secure. At the end of three days, the fan will pass the head on to the next designated member of the Red Sox faithful on the list.